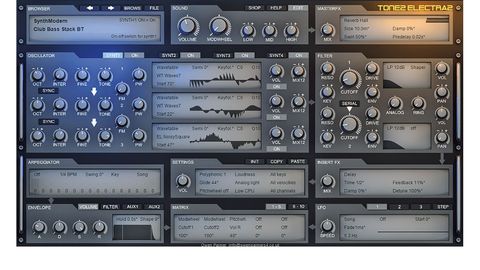 Odd high-frequency behaviour and a few other issues slightly let down an otherwise solid, versatile synth with a big sound.

Electra2 (VST/AU) is the second generation of Tone2's ElectraX, a synthesiser workstation comprising four layers (each one effectively a whole synth in itself), designed to deliver synth sounds of pretty much every conceivable kind.

Electra2 is backwards-compatible with ElectraX. Any existing 'X' installation is overwritten by '2', which then stands in for 'X' in legacy projects. As you'd expect, then, Electra2 includes every one of ElectraX's features and can load all 'X' presets as if it were a new version of ElectraX rather than a whole new instrument.

The 'bad' news, however, is that due to enhancements to the sound engine, Electra2 sounds better than - and, therefore, different to - ElectraX. While an improved engine is obviously a good thing in general, old projects with ElectraX onboard may sound subtly different when transferred over to Electra2, so we'd actually prefer to be allowed to have both versions installed at once.

Anyway, the sound quality of Electra2 is generally good in its own right. It has quite a full, clean character that will be familiar to Tone2 customers. It also has several new output colouration modes added to those of ElectraX (Linear sound, Loudness, Bass boost, Bright sound, Psychoacoustic and Analog Sound), and many of the older presets have been tweaked to make use of these.

We noticed something odd going on in the top end (around 15kHz and above), where some notes seem to be missing certain frequencies while others don't. This anomaly is often unnoticeable (depending on the patch) but could be a problem if you're relying on the synth to provide crisp detail in the highest treble ranges.

Back on the bright side, the Electra2 interface, while unchanged in layout, seems to load much faster and feels more responsive than that of ElectraX. Tone2's code optimisations mean that Electra2 can be expected to outperform ElectraX - indeed, this is a plugin that always feels very stable and robust.

Five new filter types bring the total count up to 37. The new Vocals 2 filter provides the typical vowel formant sounds that were popular in many forms of dance music a few years ago. Similarly, the new Vocal AM filter type is useful for approximating those classic dubstep 'yoys'.

LP AM combines a low-pass with a super fast ring modulator that can help add a crystalline, lo-fi crunch, while BP Boobs is a double band-pass filter that we suspect was just added on a whim when the programmers were feeling a bit bored and lonely. Lastly, the new M Shape type combines band-pass and high-pass filters.

Most of the effects carried over from ElectraX have been optimised for better performance and sound quality, while a dozen new modules have been introduced as well, bringing the total to 32. These include Smart Unison (a chorus), two phasers, two vibrato effects, two tremolo effects and five reverbs.

The reverbs are particularly impressive - so good, in fact, that they could easily alleviate the need for a separate reverb plugin most of the time. With so many high-quality processing options available, though, the realisation that you're limited to a single insert effect per layer, plus a shared master effect, is something of a dampener.

ElectraX was always able to import samples for playback, but Electra2 can automatically find loop points, tune sounds on import (or afterwards), and save samples with patches for easy recall. Further, you can edit the loop points of loaded samples by simply dragging them around, and take advantage of a new set of offline processes - including Reverse, Trim, Cut, Maximize and Remove DC - and various distortions and lo-fi effects.

It really is fun and easy to pull a sample in and manipulate it beyond the point of recognition, although it does feel like an undo feature needs adding. Of course you can still use imported sounds as the basis for the resynthesis engine, too, or for creating your own wavetables, just as you could with ElectraX.

Although not without its flaws, Electra2 is a powerful synth with a lot going for it. The presets prove that it can throw heavy punches in almost any arena, adapting its synthesis style to even the broadest ambitions.

While we're not sure that we concur with Tone2's claim that it's the only synth you need in your arsenal - it has one too many weak points and its inherent character is too strong for it to be the right choice for everything - we'd certainly describe Electra2 as a powerful and worthy addition to any virtual music studio.