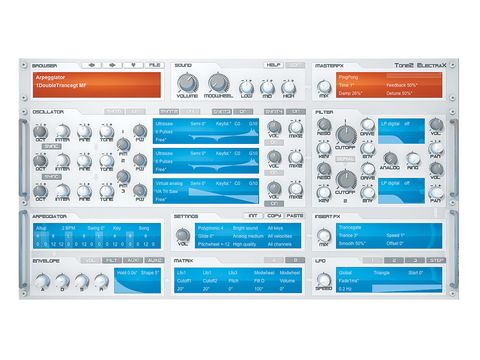 Tone2 garnered a lot of respect with its Gladiator synth - it was a gift to everybody from film-scorers to dance producers. Some purists and sound designers balked at its polished sound, but when tweaked in the right way, it could also be raw, light, or heavy. It was that good.

Enter ElectraX, which looks for all the world like Gladiator on steroids - no wonder they bill it as a 'sonic warrior'!

Fire it up and you get the same formidable synth engine times four, split across as many tabbed layers. The output from all the synths is mixed and pumped through a global effect, and that's your patch.

We'll focus on the anatomy of a single synth layer during this review, but do bear in mind that you can effectively multiply the lot by four.

The first thing you'll notice is that each of the four synth layers has its own totally different GUI skin. The first layer's white fascia is the best of a bad bunch, as the others are severely afflicted with a cheesy glow effect that impairs legibility. The actual control layout is good, though, and Tone2 says that improved skins are in the works.

We don't want to bore you with statistics, but we must mention ElectraX's 13 synthesis methods, categorised under five main types: Virtual Analog, Ultrasaw, Noise/Fractal, Sample and Wavetable.

The PW (pulse width) knob offers extra functionality for some oscillator types, most notably as the waveform selector for wavetable modes - enable the Crossblend PW option and waveform transitions are smoothly blended.

As well as basic sample playback, there's a resynthesis function that analyses a sample and plucks out its waveform so you can use it like a synth oscillator. It's a shame that you don't have control over where in the sample the waveform is extracted from, and that you can't combine multiple waveforms to create custom wavetables.

Fractal Synthesis is new to us, and Tone2 reckons it's based on chaos theory. In practice, it provides a range of unpredictable-sounding oscillator types. They won't change the way we think of synthesis forever, but they do offer some esoteric sonic twists.

In total, there are a whopping 45 oscillator types, and you can stack up to three in each synth layer. What's more, there's great-sounding sync and FM on the second and third oscillators, creating interesting interactions. Powerful indeed.

The twin multimode filters offer up a massive 23 modes, including analogue-modelled ones and oddball options like Vocals and Aliaser. They sound excellent too, with all the analogue-style juice and warmth you could need.

There are four envelopes with adjustable smoothing and 18 effects including an excellent vocoder. You get one insert effect per layer.

The LFOs in ElectraX are stunning (three regular plus a step-style one) and more than a match for the kind of bassline modulation that is so popular right now. The arpeggiator reeks of funk, with a nifty swing control - it makes a great track-starter, and remember, you get one per layer.

By now, you should have some idea of the scale of ElectraX and the sheer number of potential combinations. You might suspect ElectraX of being a case of quantity over quality, but as we've pointed out, all of its component parts are terrific, and as a whole, it sounds mind-blowing.

Our favourite things ElectraX's 560-preset factory bank is rammed full of almost every type of sound you've ever heard on film, in a club or on TV and radio, and there are some intricate, fresh-sounding tones too.

Some of our favourites include inspiring four-layer grooves, percussive sounds, vocoded patches, a string of classic noises (everything from Beat It's opening synth to the kind of '80s stabs you heard in the disco scene in Robocop) plus so many current-sounding presets that you'll think all your club sound-a-like Christmases have come at once.

If you want to go off-piste, the Initialize button offers up a list of templates for numerous basic sounds, and some of these are so useful that even sound-designers can appreciate them.

ElectraX has seen a lot of action during our review period, and we have to say that it's hard to fault it. Top of our request list is a multi-output version. Building sequenced groove patches is so fun and easy that it would be great to mix them separately.

In many functional ways, ElectraX is reminiscent of top sound modules of yesteryear, such as Roland's JV-1080 and E-MU's Orbit V2, and we'd like to use it in the same way.

Synth fiends may spot that there's no unison function outside of the Ultrasaw synthesis types, but since you can stack so many oscillators and use four synth layers, we'd say it doesn't matter - ElectraX never lacks fatness.

We should mention that we experienced a few crashes and bugs while using the synth, but a v1.1 fix should be out by the time you read this - we tried it and it did indeed resolve our issues.

ElectraX allays any doubt that Tone2 makes hugely versatile synths that can excel in any genre. But for all its far-out synthesis methods, the results don't break much new sonic ground.

It's still fantastic in its own right, though, and will suit musicians of all levels. It's perfect for novices as a sound bank; it's helpful for intermediate users learning how sounds are made; and it's rewarding for experts, who will relish its sheer power and diversity.

It's an essential purchase, and fully deserving of being your one go-to synth.

Now listen to our audio demos to hear ElectraX in action: