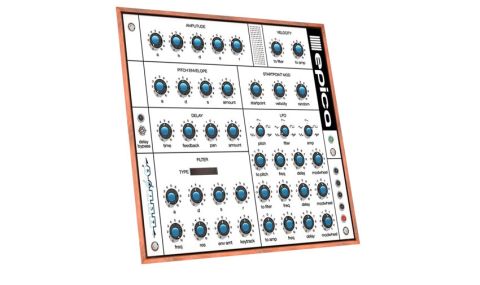 An excellent and powerful instrument with a huge range of possibilities. Highly recommended.

There are plenty of classic synth based sample collections out there so anything new needs to have an edge to be able to get its head above the rest. Designer Sam Spacey has gone all out in his quest to make Epica as special as possible.

Sounds were sampled from analogue synths such as the ARP Odyssey, Sequential Pro 1, Oberheim Matrix and Yamaha CS-30, and also from digitals such as the Virus Ti, the Yamaha DX9 and the Roland D-50. The recording signal path included Neve 1073 preamps, a UBK Fatso and an Eventide H8000FW, so all recording processing was of the highest quality.

In all 17,247 samples were made, the editing and looping was all done by hand and the whole project took nearly three years to complete. Where reverbs were recorded with the sounds, they have been sampled separately so you can balance them yourself. A great touch and just another layer in the detailed lengths that Mr Spacey has gone to.

While many of the sounds use the original synths' filters a dedicated user interface has been built which allows you to use many of Kontakt's sample manipulation parameters including the filters. This panel is laid out to look like an old style analogue synth and is simple and highly effective. Aside from the obvious amplitude and filter sections there is a delay, a pitch envelope, startpoint mod and a very comprehensive LFO section.

In traditional Kontakt style there are instrument and multi patches and the instruments are further grouped into sections such as Pads, Bass, Mono and Sequence.

The first thing you notice when you start loading patches is the variety and quality of the sounds. They have been multi-sampled to the point where no note is key-mapped more than a semitone from its original pitch and many have three or four round robins on each key. Many of the samples are incredibly long and the tails are superb right up to silence.

The recordings are stunning and so we found that we rarely reached for an EQ or compressor unless we wanted to radically change the character. That said, because the recording quality is so good the sounds respond very well to extra processing because it's all there to manipulate.

Having found a sound close to what you want there is plenty of scope to adapt it to your specific needs. While a bit of amplitude or basic filtering may be all you want, there are huge amounts of further manipulation possibilities.

The pitch envelope is great, allowing anything from subtle pitch shaping to wild swoops and rises. Startpoint mod can be set to velocity or random or both, particularly effective with a bit of subtle pitch modulation to 'humanise' a sequenced part.

It's the LFO section that is our particular favourite. There are three separate LFO sections for pitch, filter and amplitude. Each LFO has sine, sawtooth, ramp, square and random waveforms. To control how they effect each parameter there is an amount +/-, LFO frequency, delay, and modwheel +/-. The delay control allows you to bring in the modulation amount after a period of time.

As you have discrete controls for every parameter of each section it's possible to set up superbly detailed and rich modulations. Overall it reminds us of the sonic possibilities of a big modular system or an old Oberheim Expander rather than your average polysynth.

In conclusion, this is a very well thought out and powerful instrument. The presets are great and while the multis tend more towards the world of film and sound design there are so many great sounds here that you'll soon be building your own patches, and there's enough here to guarantee you'll be using it for years to come.