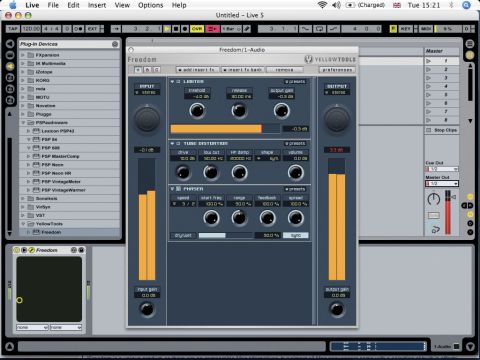 This could be a revolutionary must-have plug-in, but until the effects are dramatically improved, it´s just a great idea gone wrong…

Yellow Tools are renowned purveyors of exquisite sample libraries, and the fact that Freedom comes on just one CD lets you know that it represents something of a departure for them.

We´ve never questioned that they know their way around an audio algorithm or two (this much is proven by the sheer quality of their sample-based virtual instruments) but it certainly came as something of a surprise when we learned that their next release would be an expandable modular effects rack.It´s difficult to do anything original in this business, but we reckon that, in Freedom, Yellow Tools might just have something new. Let´s find out more…

Installation is a breeze but, unfortunately, requires a bespoke USB dongle. We fully respect the need for dongles; reducing piracy is vital, and it´s very convenient to be able to carry your licenses with you. However, if every company starts using their own, it´s the consumer who´ll suffer.

In Yellow Tools´ defence, they say none of the other options (such as iLok) enabled them to protect their sample libraries too. This being the case, they didn´t feel that it was right to iLok-protect Freedom and so force their existing customers to buy a separate dongle for the sake of one plug-in. The cost of the dongle has been deducted from the price of YT products - the idea is that you buy it once and never have to pay for it again.

Moving on, we have to report that Freedom has the same viciously angular and unfriendly visual style that Yellow Tools used in their otherwise excellent Independence. Fortunately, behind it lies a deliciously straightforward and logical interface. There´s an input level meter running down the left-hand side, an output meter down the right, and in the middle, an area where you insert the effects modules. These can be rearranged simply by dragging and dropping, and you can switch them on and off independently.

Once you have these modules in place, you can save the whole setup as a preset.

Furthermore, each of the individual modules has its own presets. Freedom comes pre-loaded with a selection of presets, but there aren´t very many of them, and none are particularly good. Freedom is begging for a good online community so people can swap their setups.

One of Freedom´s more versatile features is the automation and MIDI controller routing system. However, perhaps because of the modular nature of the plug-in, your sequencer doesn´t tell you the name of the plug-in parameter you´re controlling. As such, things can get very confusing.

And how do the effects sound? Well, disappointing. All the usual suspects are here - dynamics, delays, filters, modulation effects, distortion and reverb - but the majority of them are lacklustre and sound horribly digital. The Compressor, for example, has no life whatsoever and tends to suck the ‘oomph´ out of everything. Bit Reducer has little audible effect until it gets down to about 8-bit (at which point, it just adds digital crackle and hiss) and digital crackling also afflicts the otherwise good panning effect. Even the potentially excellent Origami LE convolving reverb crackles occasionally, particularly when the room positioner tool is used in real-time.

Our overall impression of Freedom is that it´s a huge missed opportunity - a massive shame given how good its concept is. YT have proven that you don´t need to come up with something off-the-wall to create a new and exciting product - you can just put existing ideas together in a useful new way. Effects are meant to be played with, and small amounts of a number of varying processes are often the difference between dull and lifeless signals and interesting and professional tracks. Freedom reinforces this mindset in those that have it and teaches it to those that don´t.But of course, this doesn´t really mean a lot of the effects are up to scratch, and the sad truth is that they´re not.

So, we´d suggest a few changes for the next version of Freedom. Firstly, if it´s technically possible, Yellow Tools should add the option to host third-party plug-in effects within Freedom itself, as this would enable people to swap complete custom channel strips between sequencers. Next, and most importantly, they need to come up with a vastly superior selection of built-in effects than they currently offer - our feeling is that around 90% of the current batch could be improved.

A friendlier GUI would be welcome, too, as would the facility to use automation without the confusion of numbered controllers instead of names. And then, of course, there´s the thing that they can offer without making any programming revisions at all - a half-decent selection of presets. Sadly, unless all of these issues are addressed, it has to be said that Freedom is in the running for the Most Wasted Great Idea of 2006 award.