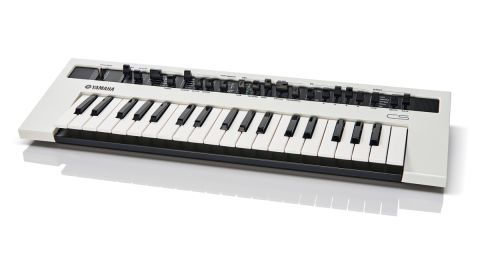 A unique sounding synth that is way more powerful than you think.

Yamaha had one of the finest sounding VA engines around in 1997's AN1X (that still stands up today) and it's great to see Yamaha making synths once again.

The Reface CS is built into the same high-quality plastic enclosure as its Reface brothers, but this time it's white - it's also lightweight yet weighty enough to feel sturdy. There's some movement in the slider tops but underneath are metal shafts meaning it should stand up to long-term abuse, while the included two 2W speakers sound pretty good (you could mic them up and blend the speaker sound with the line out for different textures too).

When using battery power (6 x AAs), the CS becomes a great board for jamming/writing on anywhere and there's a keytar kit available for all the Refaces too. Battery time is around five hours but this is dependent on battery type and usage.

The three-octave mini keyboard while not transmitting velocity (or aftertouch) to the internal engine, does receive and transmit velocity over MIDI and the keybed is susprisingly playable.

Compared to the nasty-feeling keyboard on our DX100 it's light years ahead, though a couple more octaves would have been nice. Round the back, there's MIDI In/Out over USB and (via an included breakout cable) there's also Web MIDI, plus a foot volume input, headphones and L/R outputs (on full-sized jacks) and an aux input on minijack, though this doesn't route through the sound engine.

There are 21 sliders (which send/ receive MIDI) and consequently the CS is a very hands-on instrument/ controller. What you see is what you get which is great on the one hand (as there's no menu diving) but, as there's no patch memory, when you do stumble on a great sound (which happens a lot!) there's no way within the hardware to capture that sound. This is a shame, especially bearing in mind the number of controls that need setting up per sound - the CS would have really benefited from some onboard preset memory and a small screen.

Thankfully, there's a workaround as Yamaha have developed an App called Capture (currently iOS 8+ only) which allows you to capture individual sounds and share patches and setlists via the online SoundMondo community. Be aware though, for onstage where you'll likely want to line up a few patches/ setlists, you'll need to connect the CS to an iPhone or iPad.

From left to right, there's a pitch stick (+/- 1 octave) which feels great and is still controllable for smaller bends. It's also easy to add modulation wobble with as it's nicely sensitive but unfortunately there's no mod stick - the workaround is to use the LFO's depth slider to bring in pitch or filter mod. Next up is the master volume, then an octave slider and the looper mode slider.

Following on, there's a global tempo control that sets the looper tempo internally (or externally via MIDI/USB) and a MIDI-syncable LFO which goes into audio rates for ring mod-like/crazy textures. The LFO can be sent to four destinations with variable depth but to speed up workflow, each oscillator type also has its own preset LFO mod function which includes PWM on the pulse/square wave and Osc 2 pitch on the sync wave.

Further LFO destinations include oscillator pitch, plus the filter and amp. Only one destination can be selected at a time but further wide-ranging modulation can be added with the 'texture' and 'mod' sliders which are integral to the CS's versatility. Next up is a mono/poly mode slider (eight-note polyphony max) which also controls the portamento amount in mono mode.

On first glance the CS appears to have just one oscillator but this isn't the case as it depends on the osc type selected - the system is powerful/ flexible/intuitive, providing sounds beyond your initial expectations. Multi-saw (like Roland's Supersaw) gives the option of one or several detuned saws via the mod slider (with a sub oscillator via the texture slider).

Pulse is a dual pulse/square wave oscillator with 'texture' changing the pitch of the second wave and 'mod' changing the pulse width, while Osc Sync provides classic sync tones with Osc 2 synchronised to Osc 1. Ring Mod is great for random effects/metallic noises and the FM mode effortlessly enables DX-esque tones without the usual FM programming headaches! Notably, the sound quality throughout is truly excellent and the CS is thoroughly versatile, with a sound that can run from warm and very analogue-like, through to nasty, digital, delicate and bright within just a few minor slider tweaks.

No synth is complete without a decent filter and the CS's self-oscillating 18dB-type is also versatile, providing enough guts for subby or defined basses but also enough aggression for upfront sounds. The CS easily delivers TB-303-style basses, classic CS-type brass sounds, string ensembles, evolving pads and cutting leads and there's a vocal-like quality to the resonance too.

Also, as the resonance/ filter is so characterful, it's great for making crazy effects and interesting drum/percussion sounds, particularly in combination with the LFO and the great onboard effects. To top things off, there's a snappy ADSR which is shared between the filter and amp and, although separate envelopes for filter/ amp would have been more desirable, the implementation works well in practice with some cool effects possible using the EG blend slider. Above all, it sounds great and very Yamaha!

The Reface CS, while looking simple, is actually way greater than the sum of its parts. It's addictive and inspiring to use and, despite some shortcomings, has really whet our appetite for the (hopefully) inevitable bigger things that Yamaha has planned. To sum up - a delicious starter, bring on the main course!