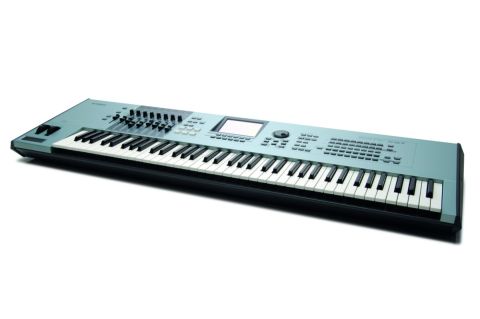 Expanded studio control integration, but not a massive sonic step forward for the range.

The Motif range has been one of Yamaha´s longest running range of keyboards, and since its inception back in 2001 it´s been successfully revamped, remodelled and re-invented to suit all kinds of needs and budgets. The workstation market has hotted up again recently, and the big three manufactures have been packing as much bang for buck as possible into keyboards. Since the MotifXS isn´t cheap, it needs to be damn good to justify its price.

It´s not just a new name for the next-generation Motif, but a new colour as well. Slate blue, to be a little more specific. This gives the synth a nice metallic sheen, and looks gorgeous in the flesh. despite being a 17kg bruiser, thanks to its solid metal chassis.

This 76-key XS7 model we have on test has channel aftertouch and a very nice action when played - the weighting is much more solid than a typical synth board, which is a big necessity, since the XS is a player´s instrument and needs to respond accordingly. The XS8 88-key version ups the ante adding a balanced hammer effect keyboard, which has a more convincing piano-style feel.

This is the first time any Motif has been graced with a large, full-colour LCD screen bringing it bang up to date with its competitors. There´s been a bit of an oversight in as much as the viewing angle can´t be tilted to quickly adjust visibility but the contrast control can help sort this out. A tilt would have been cool though.

Unfortunately, this new screen isn´t a touchscreen, so as tempting as it may be to prod it, navigation is still done via the tried-and-tested cursor keys, function buttons and the large data wheel. Nevertheless, a colour screen is undeniably easier on the eye than greyscale, especially when getting down to the nitty-gritty of complex programming.

To the right of the LCD lies an armada of buttons, the first batch select between the different performances, sequencing and utility modes. On the far side, the grey set are used for searching and selecting the sounds, and underneath these, the black buttons select parts, mutes and arps.

The left-hand side adds fun to the functionality and in a prominent position are the multi-faceted collection of eight faders and dials.

This doubles the amount found on the MotifES and the extra potential has been put to use to edit parameters in performance mode, and for controlling eight channels of a mixer within computer-based software such as Cubase.

The sequencer buttons also stand out by being much bigger than the other buttons (and because they´re gleaming white). They work with the internal sequencer and as a remote control for your DAW.

Yamaha are keen to point out that this isn´t just a bunch of recycled sounds; in fact 80 per cent of the 353MB of waveform ROM has been freshly created especially for the XS.

So what about them waves then? The XS ticks all the right boxes when it comes to acoustic pianos, guitars and organs. A fine grand, cool electrics, and a versatile Hammond that´s at home whether it´s praising the lord, or selling its soul to the devil.

The guitar library is especially impressive with an abundance of articulations and playing styles that have been captured with clarity and detail right down to squeaky string slides. Rock, Pop and Fusion are all well covered with this beast.

The symphonic sounds are very grand, and coupled with the rich reverbs, they can be layered in a very convincing way to form a huge backing orchestra with precise placements in the stereo spread.

That said, we've never been convinced by the lead saxophone and solo electric guitar patches created through PCM sample and synthesis, and this hasn´t changed our minds.

There simply isn´t enough scope to capture all of the lyrical qualities and tonal freedom from the instruments the XS serves up, but that said, for backing purposes, these patches are just fine. And on the synthetic side, we were impressed with the more abstract cinematic sounds, which on the whole are very playable and are programmed with interesting and unexpected tonal changes.

The strongest performances were the Hip Hop/ R´n´B combos, even when used as a basic starting points the XS programming was a lot more authentic sounding here than Techno, Trance and House offerings, which all sounded rather uninspired.

The good news is that for Chillout and New Age-style music, the Motif is an excellent choice. When the synthetic washes are combined with real acoustic timbres and bathed in silky effects, it really makes some exceptionally luscious sounds.

There are a hell of a lot of patches to get through, and in Performance mode, the XS can stack up to four voices across the keyboard in any combination of zones and splits. Many of these have a selection of preprogrammed arps to bring the sounds to life and also use the two assignable knobs to add what Yamaha call ‘XA´ - expanded articulation.

During voice editing the large colour screen is a real advantage as it keeps things clear and easy to distinguish. There are plenty of envelope, filter and LFO modules - in fact much more than we expected - and the level of detail in which they can be programmed really contributes to the creation of realistic-sounding patches. For example, sounds can be triggered through note on as well as note off messages - perfect when you´re trying to recreate guitar nuances and more.

Envelopes can use the pedal input to directly affect the levels, just like the sustain pedal on a real acoustic piano would. Synthesis fans will take pleasure in exploring the 18 different filter types, which include a whole load of dual band varieties such as MS20-style high- and low-pass combinations for the sonically adventurous. They can be cranked into self-oscillation but this can be a bit harsh. As far as analogue emulations go, they definitely sound more convincing at mellower resonance levels.

Anyone willing to dig deep and get their hands dirty will be happy to know that beneath the glossy exterior lies a powerful sound engine. Each single voice consists of up to eight Elements that use PCM waveforms as the basic building block.

Elements can take advantage of keyboard scaling, splits, zones and velocity crossfading, which is one of the tricks used to create interesting articulations in conjunction with the arps. With all these resources available at the Element level, it´s easy to see how this can build up to some impressively large and complex sounds when they´re combined into a single voice.

Another set of editing parameters are available at voice level including a more complex LFO (which can also be routed to the effects), EQ and a whole bunch of FX including the new stomp box style VCM effects. It´s safe to say that this Yamaha has really got the lot.

Mind you, given that Yamaha have some amazing synth technology in their portfolio, would it be too much for them to include any Virtual Analogue, FM or VL physical modelling into their flagship?

The sequencer has been improved with the addition of several workflow tweaks designed to speed up the recording process. The main one is the Direct Recording from Performance mode, which stores all the voice and effects settings along with the MIDI data, saving you the need to copy it all over manually.

In what seems like an odd move, Yamaha have abandoned the use of expansion boards with the XS. It´s not clear what they´re going to do instead, but in the meantime, new sounds can be had with the sampling option.

That said, since the XS doesn´t ship with any RAM, it´s up to the user to install it up to the 1GB limit. It´s also necessary to have a USB drive or computer connected if you want to store the recordings as they aren´t retained during power down. The XS has a pair of quarter-inch inputs on the rear for stereo recordings, and audio can be incorporated into sequenced patterns or used in place of the PCM waveforms to create new voices. All the basic trim and loop functions are available and easy to use thanks to the screen.

The XS also has a sample slice feature similar to ReCycle!, which can be applied to recordings. This locks them into the tempo and automatically time-stretches to fit the changes, which is eminently useful on beats and rhythms.

The XS is an expensive machine - it´s taken several steps forward in terms of computer integration and file management, but that might not be the kind of carrot that workstation buyers are enticed by. At the core is a top-class selection of presets, and it´s sonically very capable in areas such as real instrument emulations and deep evocative pads.

It´s brimming with features, both for live players, and composers, but potential buyers need to examine their needs and compare to the other choices in the workstation market before throwing down their cash.