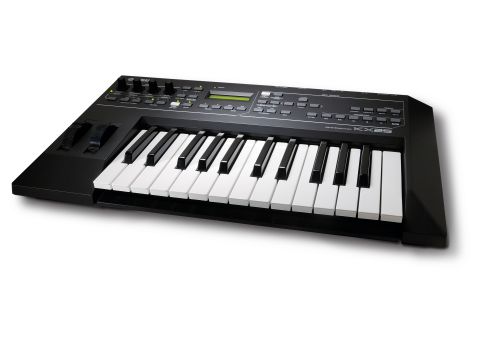 Cubase users will love the KX25, but owners of other DAWs might choose to look elsewhere.

Yamaha has designed the KX range of MIDI controllers to give Cubase users hands-on control of a number of important functions (the company owns Steinberg now, remember).

To this end, the KX25 has a healthy smattering of buttons on its surface, which can be used to add new VSTi instruments, open their editing windows, solo/mute tracks and plenty more. In theory this should lead to a smoother workflow with fewer interruptions to the creative flow.

Before we go any further, it's important to establish that all these cool features are Cubase-exclusive. So if you use Logic, Ableton Live, Reason or any other app, you won't get the extra benefits.

The KX25 is the smallest of four keyboards in the KX family, with the largest being the 88-note hammer action KX8. It's important to note that there is no keyboard aftertouch, could put you off immediately.

The body is rather angular in shape and unashamedly plastic; the upside of this is that the KX25 is nice and light for transporting. The control surface is roughly split into three areas: knobs on the left for VSTi control; system configuration buttons in the middle; and Cubase DAW controls on the right.

Before plugging into the computer, you need to install the MIDI driver. To get the maximum benefits of Cubase integration, you also need to install an 'extension set'. This automatically configures Cubase to recognise the KX25 in the Device panel and respond to its DAW commands.

Yamaha has thrown in a copy of Cubase AI to kickstart the integration process. Also in the box is another DVD rammed with virtual instruments from the likes of Arturia, IK Multimedia and FXpansion. Other highlights include a sampled version of Yamaha's S90ES piano. What this adds up to is a cool starter pack for project studios and education centres.

We used the supplied copy of Cubase AI in our tests. Before getting stuck in to the music, you need to check the KX device in the Cubase MIDI panel and switch off ports 2 and 3. Otherwise the DAW buttons will also trigger MIDI notes alongside the desired commands.

The default setup includes a transport deck, track solo/mute buttons and two pairs of assignable controls. In fact, all the controls can be configured to your taste by accessing the massive list of options in the device panel. Anything from auto-quantising to opening editing windows can be chosen - you can tailor the KX25 to suit your requirements.

One pair of buttons enables you to add a new instrument track and open the VSTi window for editing. Below them is another pair, while two more are used for selecting instrument presets. This pretty much adds up to a self-contained unit for accessing new sounds without needing to touch the mouse.

What tends to come next in the programming stage is a bit of knob tweaking, which brings us over to the left-hand side and the bank of four rotaries. The knobs themselves are dented encoders of average sturdiness. A switch underneath selects between the layers (offering up to eight parameters per template) and an LED denotes which set is currently in use.

The nice little trick here is that if you already have a template set up for the instrument in use, then the KX25 will automatically switch to it. So, as if by magic, the right controls are at your fingertips and no time is wasted searching through the template banks.

Now while some users will be satisfied with eight knobs, others will always need more. As a workaround, we created extra templates for each instrument which gave us access to the extra controls we needed. Not ideal, but it got the job done.

The arpeggiator is a bit of a niche feature for a MIDI controller - this offers 342 phrases/patterns which have been drawn from the Motif collection. These are organised by categories and there are several editable parameters including swing and gate times.

The bulk of the patterns are designed for backing tracks and can sound pretty good when matched with the right sound.

After several sessions with the KX25, we really started to get in the swing of the DAW commands. We had our synth templates sorted and had settled on a choice of Cubase functions, which were most useful to have at hand. This keyboard certainly speeds up the music-making process in the area of virtual instrument programming.

The KX25 did perform flawlessly, but once bitten by the bug we can't help but crave for more of everything. More knobs for tweaking the synths and more function buttons for bossing Cubase around. This would fulfil the keyboard's potential and make it a powerful and essential tool for owners of Steinberg's software.