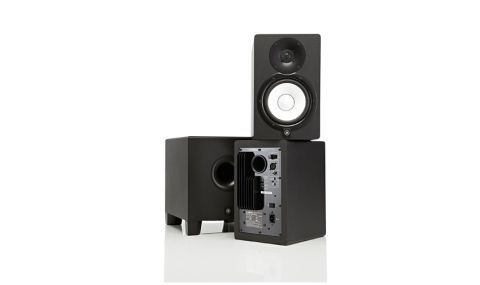 A classic Yamaha look but with improved performance for today's studios.

Yamaha has revamped its studio monitor series recently with the release of the second generation of the HS range - the HS5, HS7 and HS8 powered nearfield monitors, any of which can be partnered with the new HS8S subwoofer.

Whereas the HS5 and HS8 appear to be direct replacements for the HS50M and HS80M - the 5s and 8s referring to the size of their LF drivers in inches - the HS7 is positioned between the two, being equipped with a 6.5-inch LF driver (we guess H7 sounds sexier than H6.5).

Like the rest of the series, the HS7s are bi-amped. You get 65 watts driving that low frequency speaker while there are 30 watts available for the 1-inch dome high frequency driver, which has been newly designed in collaboration with Yamaha's hi-fi designers to allow frequencies of up to 30kHz.

The smart looking MDF cabinet with rear bass port also has reduced cabinet resonances courtesy of a new three-way mitre joint construction feature, this time a joint effort with Yamaha's piano designers. As far as we know, there's been no input from Yamaha's motorbike designers which is probably a good thing...

As it is you do get some nicely thought out rear-panel adjustment switches. As well as the volume knob, there's a choice of a 2dB cut or boost to tailor the top end to suit your taste and a 'Room Control' switch to adjust the bottom end response to compensate for corner and close-to-the-wall placement.

Now, to many of us, the HS series look is overly familiar - that white LF driver being highly reminiscent of the passive NS-10 family, discontinued some time ago and ubiquitous in professional studios since they were first launched back in the 1980s.

That look is no coincidence, the original NS-10 designer was involved here and Yamaha is keen to promote the idea of a family lineage, saying that the HS series share the same design philosophy. They seem to have got it spot on.

In a side by side test with our NS10M Studios we found that the newcomers had an extremely similar character but exhibited a little more airiness in the top end and a deeper bass response, as might be expected comparing the specifications, and no bad thing as bottom end wasn't the NS-10's strongest asset.

Reproducing a wide variety of music and various individual instruments, the HS7s offer plenty of clarity, nice depth of field and a good sense of stereo positioning. The frequency response seems well-balanced with nothing missing and nothing overtly hyped and, for a small nearfield, the bottom end is defined in a way that should give you a decent reading of the foundations of your track.

If you want more emphasis on the bottom end, or are looking to put together a 5.1 surround system, you can add the HS8S subwoofer to the set-up with a further 150 watts of low-end power.

Plugging the HS8S in gives a powerful system for music playback but we still consider that the HS7s have enough sonic range, in themselves, to give an accurate impression of low end for most studio scenarios, and would be happy to undertake mixing on them without the subwoofer.

The HS7 shows that Yamaha have refined the HS series to provide a small powered nearfield that you can use with confidence, especially if you are used to working with NS10s.