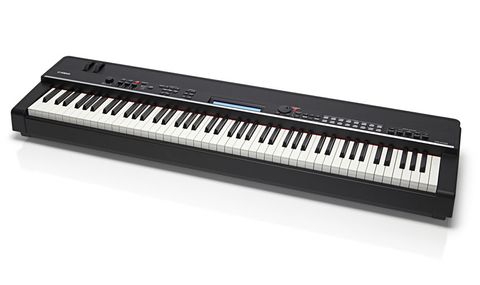 The last Yamaha Stage Piano this writer reviewed was their flagship CP1 back in 2010 and though it had great pianos and EPs onboard, it lacked in a few key areas. It was expensive (almost £4,000) it had no pedal on/off resonance, only two-part multi-timbrality and it was damn heavy too!

Happily, Yamaha has addressed most of these shortcomings with the new CP4, though there's still no pedal on/off resonance as on the Nord Piano 2. Thankfully, the price is much lower (£1,700 street) and there are now three parts available for each sound (Main, Layer and Split).

Also, the weight is now a manageable 38lbs which makes it liftable for one person when uncased, compared to the CP1 which weighed in at a hefty 60lbs uncased.

A touch of class

The CP4 follows the understated styling of the CP1 and it looks classy/functional with a nod to electric pianos of yesterday. Build quality is sturdy but as the CP4 is slimmer than the CP1 you can't stand anything else on top (except an iPad!), so you'll need a dual-tier stand if you want to use a second board.

Action-wise the CP4's keybed is amongst the best we've played on a stage piano. The wooden keys (white keys only) feel better than any plastic-keyed equivalent and the action begs to be played. It's nicely balanced and fast to play accurately, with just the right amount of weight to give you the control needed for bringing out the nuances in acoustic and electric piano sounds.

In use the CP4 is simple enough to navigate and the blue backlit display conveys parameters and functions smartly. The CP1 was slightly faster to work with due to its under-screen rotaries but it's easy enough using the CP4's cursors and jog wheel instead.

There's also a pitch wheel and assignable mod wheel that can be assigned to various key effect parameters and sound modifying functions including pitch mod for the synth, rotary speaker speed, depth/ speed of auto-panning and more.

Selecting sounds is done by hitting the desired instrument category button and then scrolling through the voices within each category. Setting up and balancing splits, layers and effects is easy with the three 'part' sliders, and multi-sound set-ups can be saved as Performances (128 user slots) which include filter/envelope settings plus MIDI zones (up to four) and you can MIDI-up a second board to control any layer within a Performance. To layer a sound, press two category select buttons together, then dial in the sounds onscreen. To set up a split, press Split and dial in the sound. Easy!

Sound-wise the CP4 is impressive. The new CFX pianos are inspiring to play solo or as part of an ensemble, the CF pianos from the CP1 still sound great and the S6 samples, though thinner sounding, add another distinctive flavour. There are stereo and mono varieties too and all the samples sound great dry.

The modelled EP sounds onboard (reed and tine) are also very authentic and each model comes with its own corresponding modelled preamp, plus you can also tweak the strike position of the virtual tines/reeds!

There are plenty of other ways to tweak the sounds too, including using the high-quality five-band EQ, or the many great sounding effects onboard. Each Voice has two insert-effect parts, a chorus block, reverb block and master compressor/EQ too.

With around 433 sounds onboard, there's everything you'll need for most playing scenarios and the quality is high throughout. The only real downside is you can't load your own samples like the Nord Piano 2. Highly recommended.