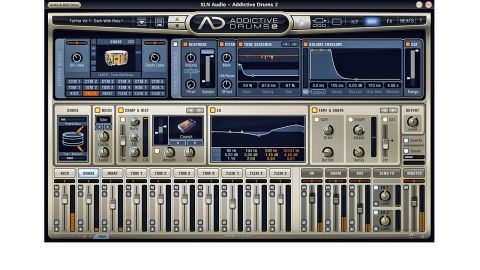 Addictive Drums 2 keeps the ease of use and lightweight resource demands of v1 while improving both flexibility and sound.

Eight years ago, Addictive Drums first hit our hard drives, and it's testament to the quality of XLN Audio's debut release that it's managed to stay relevant for so long without any kind of overhaul - until now.

The good news is that Addictive Drums 2 doesn't break anything in its goal of improving the instrument's core remit - namely, delivering a flexible, realistic virtual drum kit and (preset-driven) drummer with a relatively low hard drive footprint and an almost non-existent learning curve.

The first thing to know about AD2 (VST/AU/AAX/ standalone) is that it eschews the conventional notion of a 'core' sound library. Instead, you buy whichever drum kit(s) and grooves you want and the engine/interface comes bundled for free.

The upside is that you can truly pick and mix your elements; the downside is that in order to make this possible, XLN Audio have divided the entire Addictive Drums library up into three separately purchased module types: ADpaks (kits), MIDIpaks ('beats' - ie, grooves) and Kitpiece Paks (individual sound expansions). Existing users will find this pretty confusing at first (see Updates and library matters for details), but it does give newcomers plenty of options.

Addictive Drums 2 is visually and functionally similar to XLN's Addictive Keys, with Gallery and Explore pages now complementing the established Kit, Edit, FX and Beats pages. Gallery and Explore enable you to browse and audition the kits and kit presets you own alongside those that you don't, with a 'Buy now' banner linking to the online store.

A slightly depressing sign of the times this may be, but it does offer quick insight into what's available, as well as auditioning of their excellent and varied kit presets.

AD2's other new features enhance what came before. First, the maximum kit size has increased, with six new kit piece slots making 18 in total, three of them freely assignable to any sound you like and the rest serving specific roles - kick, snare, etc.

The Kit Piece Controls section sports two new options: Response and Tone Designer. Response gives precise control over filter cutoff and volume velocity modulation, as well as Alternate (round robin) mode on/off, and velocity limiting and offset. This all enables detailed tweaking of the response of each kit piece to MIDI without actually tweaking the MIDI itself.

Snares and kicks can be sonically shaped with the Tone Designer. TD's exact behaviour is specific to each kit piece, but essentially, it adjusts the frequency content, including resonant frequencies, and those contributing to brightness and boominess. Also specific to snares and kicks is the new Link option for simultaneous triggering of user-connected kit pieces.

There are now a handful of sampled synth tones and noises built into the engine itself - sine waves, white noise, kicks and snares, etc - for combining with the kit pieces. The big news, though, is the new Fairfax Vol. 1 drum kit. Recorded at LA's Fairfax Studio, this is a big, bold earthy Gretsch rock kit with two snares - Tama and Craviotto - and Zildjian K cymbals.

Although integrated MIDI groove sequencing remains absent from AD2 (its beats have to be dragged from the library into your DAW to be edited), the Beats browser boasts two major new features. Grid Search allows you to choose a pattern or quickly enter one into a grid, upon which AD2 filters the resulting list of beats down to the most similar ones in the library; and MIDI Transform modifies the library beats by adjusting their velocity ranges, velocity offsets and accenting, and reassigning pattern elements to different articulations. Naturally, these adjustments become part of the MIDI file dragged into your DAW.

Finally, AD2 includes two new recording options. The Audio Recorder constantly buffers up to 15 seconds of AD2's audio output, no matter what you're doing with it, for dragging to your DAW or desktop as a WAV file, while the Record MIDI function lets you capture MIDI from your DAW or keyboard to create your own beats.

Addictive Drums 2 represents a serious upgrade from v1, with awesome new processing options like the new Noise modules' Vinyl setting and the IronTransformer distortion algorithm combining with the new tape saturation and transient shaper to open up many extra avenues of drum design.

The Fairfax drum kit sounds terrific, with a well-captured room sound to match; and the Tone Designer is a brilliant addition, providing a quick and powerful alternative to EQ for managing ringing and resonances in kicks and snares.

However, there's still no integrated sequencer or complex bleed functions (snare buzz from kick and toms is as far as it goes), but XLN tell us that these are deliberate omissions in order to keep AD2 simple.

Although the change in library implementation made us feel like retreating to the comfort of version 1 at times, Addictive Drums 2 is a resounding success. It's still light and easy to use, but with a sound that's better than ever, and it stands up well to its competitors from FXpansion and Toontrack.