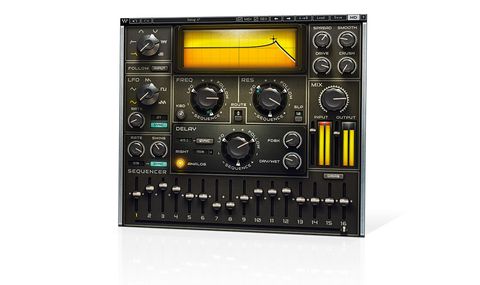 MetaFilter is effective, efficient and sounds gorgeous, but it could be more aggressive and doesn't do anything particularly original.

Don't let its vintage-style GUI fool you; Waves' MetaFilter is a plugin (VST/AU/RTAS/AAX) aimed squarely at the modern producer.

While its central multimode filter may have something of a 'classic' feel to it, thanks to its well- implemented modulation tools, built-in effects and handy sidechain input, what MetaFilter really excels at is creating the sort of exaggerated sweeps and pumping effects that are ubiquitous in modern club music.

MetaFilter is built on a virtual analogue filter that can be switched between six modes: low-, high- and band-pass, band reject, comb and 'amp', the last for gate-style effects.

There are two main dials for controlling the filter: Cutoff (which becomes a delay control in comb mode and gain in amp mode) and Resonance (which controls feedback for the comb filter), both of which are accompanied by three small sliders for setting the depth of modulation applied by each of the plugin's three mod sources (see On the move). There's also a slope switch for flipping the filter between 12 and 24dB/octave slopes, along with a keyboard follow function.

Beyond the filter itself, MetaFilter features a handful of effects and global parameters, the most prominent of which is the Delay section. The delay includes a Rate control that also comes with three modulation depth sliders, along with separate Feedback and Dry/Wet mix dials.

There's a Sync button, for syncing the delay to host tempo, and the ability to offset the right channel by either 150% or 200%. Additionally, the delay can be switched to Analog mode, which emulates vintage delay hardware by applying smoother transitions between settings when modulating the Rate.

At the top right of the GUI are four global controls: Spread, for setting slight cutoff offset between the left and right channels; Smooth, for smoothing out abrupt filter changes; Crush, a sample rate reducer; and Drive, for overdriving the input signal. Finally, a global Mix dial and Input and Output faders round things off.

Whether the sum total of all these features is enough to warrant the 'meta' part of MetaFilter's name is debatable; there's hardly any functionality here that we'd describe as convention-busting or game-changing. That said, everything has been well-implemented and the plugin sounds great.

MetaFilter uses the same Virtual Voltage technology that featured in Waves' Element synth, and the sound it delivers has plenty of warmth and character to it - a cut above most other filters in our plugins folder, certainly.

The only elements of MetaFilter that feel a little lacking sonically are the Drive and Crush functions, which, although capable of adding character, aren't quite extreme enough for our tastes - even with both turned up to max, we were left craving just a little more grit and aggression. Still, the well-thought-out modulation section and quality delay make MetaFilter a fantastic tool for quickly sculpting wild filter effects. An intuitive MIDI learn system adds to its appeal for live performers, too.

While it might not be as flexible as, say, Cableguys' Filtershaper 3 or Sugar Bytes' WOW 2, MetaFilter is certainly a well-equipped all-rounder, combining vintage character with a modern featureset and approach.