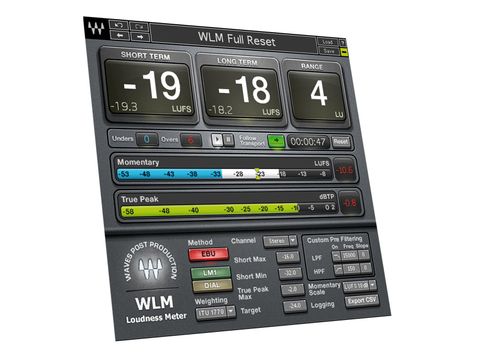 A pro-level metering plug-in that covers all output bases comprehensively.

Loudness in mixes is a hot topic in music production and has been ever since the 'loudness wars' first erupted.

For the uninitiated, one of the key components in mastering is the process of 'loudness maximising', which one can think of as a compression process with a 'ceiling'.

"The WLM meters output levels from mixes to ensure that these are 'compliant' with guidelines, though the tools on offer are just as valuable to mastering engineers cutting records. "

If you add volume to low volume content but set a level above which a mix cannot rise, you're effectively squashing a signal up to a maximum level and the more you push the volume of quieter signals, the more significant that squash becomes.

The 'loudness wars' are so-called because there was a determination by some artists for their records to seem louder than those of others. As people (wrongly) associate high volume with high quality, the requirement to have a record mastered as loudly as possible became paramount.

One of the main problems with squashing all life from a mix at the mastering stage is that, despite the overall ceiling, internal mix distortion can build, bringing nasty digital artifacts that degrade a mix's quality. Fortunately, bearing in mind that music is all about variation and 'loud' can only be appreciated if there's also 'soft' to provide light to the shade, most artists have stepped back from the 'loudest is best' philosophy, but that doesn't mean that loudness maximising doesn't remain a critical part of the mastering process.

Of course, music is mastered for all kinds of purposes, the creation of CDs and MP3s being just one. In addition to the requirements set by artists for their mastered projects, there are guidelines for television mastering, for cinema trailers and films and other outlets for audio content too.

Television, in particular, now has strict rules about levels to ensure that as viewers flick from one channel to another, or as programmes give way to commercial breaks, we're not all reaching for our remotes to adjust levels. The same thing is true in radio broadcasting too, in part to ensure that drivers aren't constantly groping for volume controls when they should be concentrating on the road ahead.

The WLM is a professional plug-in aimed at providing metering of output levels from mixes to ensure that these are 'compliant' with the guidelines as described above, though the tools on offer are just as valuable to mastering engineers cutting records.

The display is split into two sections with the upper panel providing large text-based readouts of Short Term,Long Term and Range levels, while below, Momentary and True Peak values are displayed as levels are tracked in real-time. In the lower section, you can select the Measurement Method with the broadcast standard EBU covered alongside LM1 (whole program) and Dial, which measures average volume when dialogue is detected, to help ensure balances are set for music against the spoken word.

The plug-in will work with mono, stereo or surround material and an output log of levels can be created in real-time to help you identify problem spots. There's no doubt that this is a niche plug-in to aid a relatively small group of audio professionals, whose job is to be responsible for the output levels of mixes of all descriptions, primarily for broadcast purposes. If you're working in that field, it's hard to imagine a more comprehensive tool.