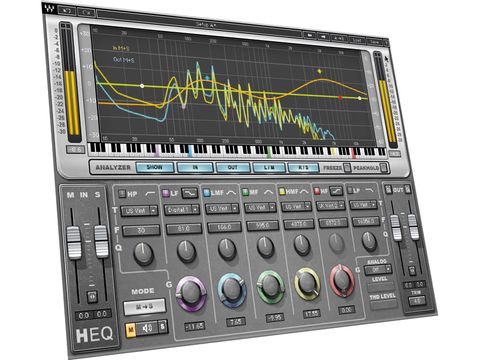 In a crowded marketplace, there's always room for quality. H-EQ has it by the bucket-load.

With every DAW featuring a range of its own EQs, and the market also saturated with third-party choices, you'd think we might have our bases covered in this particular sound-shaping territory.

However, as ever, if a plug-in comes along which sounds great and aids the creation of music, there's always room for another contender and that's what Waves have set out to achieve with their H(ybrid)-EQ.

"There's plenty of scope to experiment with the curves which best suit your material."

The name 'Hybrid' stems from the fact that H-EQ can be configured in a number of different ways. Firstly, there are a number of equalisation curves to choose from within each band, which include models of classic American and British consoles, so you can work from a number of sonic starting points.

Each of these features its own unique tonal footprint, so there's plenty of scope to experiment with the curves which best suit your material.

Secondly, the usual EQ GUI graph is enhanced with the addition of a musical keyboard graphic, which allows you to directly correlate the bands you're using to their pitch equivalents. This is a hugely important feature, as so many people forget that pitch and frequency are the same thing.

Allowing you to see exactly which frequencies (and therefore which notes) are being boosted or cut through the choices you make is great, and makes the whole process of tone-shaping more obviously musical.

In fact, the graphical display goes further still, with options displaying input and output signals, Freezing of the analysis signal and a 'Peakhold' option, which only updates the graph when a frequency band is notched higher in volume.

As well as working on material in regular mono or stereo modes, the stereo channel can be de-coupled to allow separate tone changes to each side and there's also an M/S Matrix which allows you to work in mid/side mode.

All of which would count for not a jot were this a plug-in which delivered disappointing sonic results, - but rest easy readers, that's not the case at all.

Below the graph and keyboard read-out, the colours for each band are matched to their parameter sets. Clicking the coloured squares toggles bands on/off, while a drop-down menu below then lets you select the filter 'type' for that band, with US Vintage, two brands of UK Vintage, US Modern, UK Modern and 2 Digital variants, the first of which launches Waves' own asymmetrical bell filter upon the world.

This allows for some radical and musically useful filter slopes that can produce interesting results on a range of material. The box underneath this shows the central frequency of the band, which can be adjusted with a rotary or have a value typed in directly, while there's also a dial to adjust bandwidth.

This wealth of options translates to a varied and rich-sounding EQ. For mastering applications, it works well to either subtly lift mixes or provide more varied M/S operation while it works beautifully on individual instruments too.

Bandwidth is sufficiently tight that it's easy to eradicate problem frequencies, while the range of EQ types allow you to build a hybrid console with, for instance, a classic American bottom end, with a UK flavour covering upper mids and treble.

We'd have no hesitation in recommending this EQ to anyone, particularly at its current, lower introductory price.