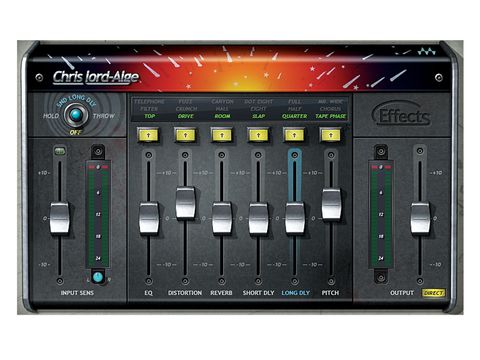 Chris Lord-Alge (aka CLA) is famous for his classic American rock sound, and this range of effects broadly covers his trademark tones for rock instruments. It includes six plug-ins: Drums, Bass, Guitars, Vocals, Unplugged and Effects.

Lord of the mix

Whether or not you like the American rock sound of Chris Lord-Alge, you can't deny his domination in that field of music. He's been at the forefront of rock mixing for around a quarter of a century.

His sound is characterised as full-on yet light on mid-range tones. The masses love it and it undeniably comes across well on the radio, sounding 'loud and punchy' when heard alongside other mixes.

Such all-out sonics can become tiring on the ears, however - the Lord alone knows how he manages to stick with it for a whole day's mixing!

Chris will tell you that part of his secret is listening at low levels on simple reference systems such as his Sony boombox. He'll also tell you that he finishes a mix in one to five hours. That's quick!

To work on that sort of timescale, you have to know exactly how you want the mix to sound before you start and be instantly decisive throughout your mixing session - there's no time to 'um and ah' about whether you like the hi-hat sound.

Whatever you think of CLA's mix aesthetic, you can't deny the calibre of his CV, with artists like U2, Avril Lavigne, My Chemical Romance, Nickelback, Green Day, Paramore, Rod Stewart and Celine Dion being just a few of his clients over the years.

Each of the plug-ins consists of five or six controller faders sandwiched between input and output level faders. Each controller is assigned a specific sonic attribute, so in the case of the Drums plug-in, you get Bass, Treble, Compress, Reverb, Gate, and the faders simply dial in 'more' or 'less' of that effect.

It's not always clear what's going on under the hood and you don't get precise control. The idea is that you don't need to worry about that - just dial in what you want to hear.

Buttons above each fader toggle through effect variations, and clicking the chosen colour bypasses that effect. For example, on the Drums plug-in, the variations for the Bass fader are Sub, Lower and Higher.

Some of the plug-ins feature extra controls in the top-left corner. Sticking with Drums, you can switch between fundamental drum types: kick, snare, toms, room, overheads and cowbell. These give you CLA's classic effects approaches for the different drums.

There are all sorts of limitations with this style of plug-in, but that's kind of the point. The idea is to get immediate results without faffing around with various plug-ins chained together. It's an instant time-saving fix, and in the case of the Drums, it really does work well.

You can get powerful, punchy, weighty kicks and cracking snare sounds in no time at all. And if you want to refine it with, say, additional EQ, you can always add one in later.

We'd like the plug-ins to be modular, so that it would be possible to drag the faders into a different order. Anyway, we've talked plenty about the Drums plug-in so far. Our verdict? Big tick.

Getting a good bass sound is always hard: the weight, the cut and the drive all have to be just right. The CLA Bass plug-in provides a range of immediate setups for a powerful rock bass that would translate effectively into other genres, especially hip-hop and electronic styles.

The three distortion settings are great: Growl, Roar and Rip speak for themselves! The Sub settings and three low-frequency curves put the areas you want to tweak right at your fingertips, and the brick wall limiting keeps the sound rock solid. Bass verdict: Even bigger tick.

On to the Guitars plug-in. You can select between Clean, Crunch and Heavy amp styles. If your guitars are DI'ed, you can flip the Re-Amplify switch to apply a built-in amp sim, otherwise the processing is tailored for an amped signal in the chosen style.

There are also compression and EQ settings, and some stereo effects. The size and crunch of the thing is impressive and the delays are synchronised to the host tempo.

Again, the instant gratification is a knockout, though you will need further plug-ins to refine your sound. Guitars verdict: Tick.

The vocal is the focal point for most listeners, so the 'instant fix' of the Vocals plug-in is only really appropriate when you're in a hurry to get a monitor mix together. Even so, the quality of results is surprising considering the limitations.

The choice of compression curves and the top-end EQ are both good. A 'body' or mid control might have been a worthwhile addition but then CLA isn't known for his forward midrange! Vocals verdict: Small tick.

The Unplugged plug-in offers a range of EQ, compression, reverb and delays designed specifically for acoustic instruments, but also useful for roughing up clean DI signals.

It has two different reverbs, each with pre-delay, so you can get a good range of spaces for your mix. Unplugged verdict: Tick.

Effects is a general-purpose multieffects module with some distortions and stereo modulations along with EQ, delays and reverbs.

One useful feature is the Throw button, which is for dubbing momentary long delays on specific words or phrases using the host's automation system. It's a big time-saver, being simpler to set up than the normal send automation process. So, the Effects verdict: Big tick.

It's clear that a lot of thought and research has gone into this bundle. It could easily have gone very wrong because of the inherent design limitations, but each of the plug-ins effectively encapsulates Chris Lord-Alge's sound within a specific window.

All you have to do is pick the 'flavours' you want and give yourself 'more' or 'less' of each. The plug-ins have uses outside rock too: a synth part could easily benefit from Guitars and electronic drums should sound less tame when driven through Drums. Overall, this is a simple but very effective collection.

Now listen to our audio demos to hear how the CLA Artist Signature Collection sounds: