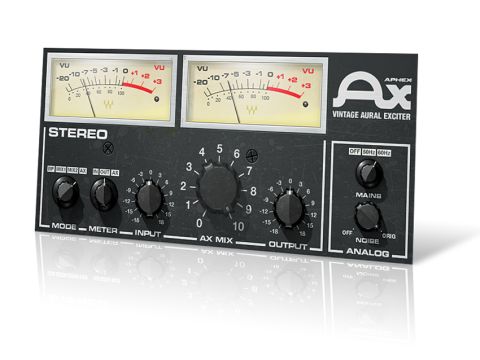 Like a real Aural Exciter, this emulation is by no means essential - yet it of¬fers a sound that's seductive in certain situations.

This rare valve-based design first gained popularity among pro users as a rental-only unit, prompting further developments through the late 1970s. This included a shift to fully solid-state electronics, ultimately culminating in the off-the-shelf hardware products that are still available to buy today.

As its name implies, the Waves Aphex Vintage Aural Exciter is an exciter, and it adds a treble 'sheen' to any signal. This was particularly useful back in the day for pepping up signals that had become dull due to multiple generations of tape dubbing.

As you might expect from an old-school piece of kit, controls are simple, with the main knobs being Input, Output and Mix levels. However, Waves have incorporated idiosyncrasies from the original into their design.

The Mode knob offers four options, including Bypass, which still colours the signal subtly, like the real unit. The other modes allow you to use the plug-in as an auxiliary (AX) or insert (MIX1/MIX2). There's also a Noise level (circuit noise), Mains hum (off, 50Hz and 60Hz) and VU meters with calibration.

On the original unit, the results of using the Mix control sounded quite different to those made when blending in the effect via an aux channel on the desk. For flexibility, the Waves plug-in replicates the original unit's built-in mix function (MIX2), and a 'clean' parallel process (MIX1), so you can get the auxiliary sound but with the convenience of an insert.

The auxiliary (AX) mode includes a high-pass filter, so you're only looking at useful signal from about 800Hz upwards.

The two mix modes differ in that MIX1 (the cleaner parallel option) scoops out the signal around the 1.25kHz point, though this is only obvious at higher mix settings. By contrast, MIX2 is very dependent on the mix blend, allowing you to achieve a midrange boost with high-frequency dip, as well as more obvious broad treble boost.

The essence of the Aphex effect are extra second and third harmonics, and as mentioned, these only really kick in for fundamental frequencies above 800Hz. As you push the input harder, more of the frequency spectrum is affected and higher-order harmonics generated.

Cranking up an exciter can be quite, well, exciting, but the effect often becomes tiring to listen to. Therefore, exciters tend to work best in small doses, and the Aphex Vintage Aural Exciter is no exception.

We found it best to steer clear of full mixes and use it sparingly as an auxiliary. It's also rather good at adding bite to instruments needing attack, like picked bass, close-miked snare drums or loops needing something extra.

Here, the new MIX1 insert mode proved very useful and more predictable tonally than MIX2. Even so, at high mix settings, that midrange dip can become too much. Other success came when inserting the Aphex across our bussed electric guitars, generating some added bite but without the general boost associated with EQ.

Aphex's Aural Exciters have come in various forms over the years, but Waves' emulation is based on the very first design, which was valve-based and behaved differently in insert and aux configurations.

However, as Aphex developed their solid-state units, features and flexibility increased. On later Aphex units, you'll find two controls - Harmonics and Tune - that are not on the vintage version.

The first controls the amount of harmonics generated, and so effectively acts as an additional drive control. By contrast, Tune limits the effected frequencies by adjusting the high-pass filter's cutoff frequency. Both options make fine-tuning the results much easier.

Modern Aural Exciters are just as popular for their Big Bottom circuit, which delivers bass punch without excessive flabbiness. This wasn't around back in the day, though, meaning that once again, you won't find it on the Waves Aphex Vintage Aural Exciter.

The Aphex Vintage Aural Exciter offers an alternative to plain old EQ when you're after extra air. But a little goes a long way, and you'll find traditional EQ is more suitable for master buss duties.

While "Aural Excitement" isn't quite so vital nowadays, Waves have done a good job in bringing it to plug-in users.

Now listen to our audio demo to hear the Aphex Vintage Aural Exciter in action on:

Picked Bass: in MIX1 mode gradually increasing the mix control to max then bypassing to compare. Then the same process using MIX2 mode.

Snare top mic: in MIX1 mode gradually increasing mix control to max, then bypass to compare. Then the same using MIX2 except after bypass compare, winding the mix back down again. Note the non-linear response.

Bussed rock guitars: in MIX1 mode sweep the mix control up to max then back down again, then the same in MIX2 mode.

Drum kit: using the Aphex as an auxiliary. First some full kit with no effect, then full kit with some effect added to kick, snare top, toms and accent crash.