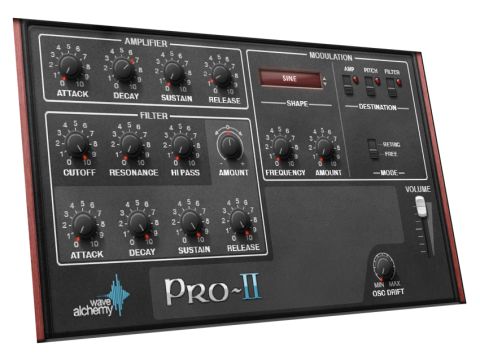 The Pro-II takes the Pro-One as its sonic starting point and updates it solidly for the 21st century.

Yet another classic synthesizer recreated in software? Not exactly…

The Pro-II uses thousands of samples of the venerable Sequential Circuits Pro-One and presents them through NI's Kontakt sampler. But that's just the beginning.

"The bass end of this synthesizer is solid, strong and truly deserves that over-used term 'warm'…"

The Pro-II has two different approaches to making sounds: you either play samples of patches from a Pro-One through the synthesizer, much like a typical Kontakt instrument, or you can use what Wave Alchemy calls 'Raw Oscillators'. It's these Raw Oscillators that really define the Pro-II's 'hybrid' sound and take it way beyond a simple sample player.

Every note in a five octave range has been sampled for each waveform and each oscillator, which generates studio-shaking sounds. The bass end of this synthesizer is solid, strong and truly deserves that over-used term 'warm'; there's none of the loss of focus found when samples are slowed down for lower pitches. And at the other end of the frequency spectrum there's no aliasing or tell-tale 'glassiness' that betrays so many virtual synthesizers.

The included sounds are superb too; 'Trancy Strings' is a haunting analogue string patch with a profound depth and atmosphere. 'Boc Synth' will delight Boards of Canada fans and the various 'PWM Bass' settings add that Sequential Circuits grit to the bottom end.

Our favourite of the Pro-One presets is 'Short Saw Decay', a sound so simple it could be easily overlooked but has a punch that can cut through any Tech-House mix. The sequencer will sync to your current song's tempo but doesn't export MIDI information for you to edit, which is a shame.

Despite being a fantastic-sounding synth, there are instances where the limitations of Kontakt spoil the fun: if you change the waveform of an oscillator with a key depressed, the wave does not actually change until you play your next note. Although not a deal-breaker this will be a nuisance for those who prefer to audition waveforms while holding down a note.

And while the Pro-II features dozens of samples of the Pro-One with cross modulation, pitch sweeps and esoteric routings, which were the staple sounds of the original instrument, you can't actually create these sounds yourself from scratch - there are no cross modulation facilities.

The Pro-II does not pretend to be a virtual Pro-One, and on balance is all the better for it. Instead, Waves Alchemy has designed a bold update of the analogue sound for the 21st century.

Creating your own sounds from scratch is about as easy as could be. But what sets this instrument apart is the sound: it feels as solid as a rock with a weight and power normally reserved for true analogue synthesizers.

The Pro-II is an excellent instrument and at this amazing price could be an impulse purchase you won't regret.