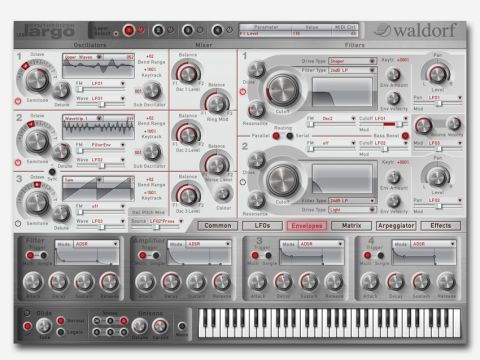 It's not the be-all and end-all of synths, but Largo does the Waldorf name proud and will no doubt appease wavetable fanatics

Waldorf recently emerged from a brief hiatus with a new line of hardware synths that draws heavily upon its older instruments. This would be news enough for synthesizer aficionados, but the recent announcement of a virtual variant carrying the Waldorf name adds even more excitement.

Largo presents a familiar character. It's a cross-platform VST and AU plug-in, with each of the synth's four layers sporting a five-oscillator structure (if you include the sub oscillators). The third oscillator is a fairly standard virtual analogue model, with saw, sine, pulse (including PWM) and triangle waves available.

More interesting are oscillators 1 and 2, which offer 68 wavetables culled from the Wave, MicroWave, Q and Blofeld hardware synths. These wavetables can be modulated dynamically, and oscillator sync is available. Noise (with adjustable colour) and ring modulation are on hand, and you can dial in FM between the oscillators and noise generator.

Adjustable key-tracking is provided as well - crucial for far-out FM excursions and atonal effects. Unison and glide are on tap, too.

Waldorf's hardware is known for its exceptional digital filters, and Largo does nothing to tarnish that reputation. You get a pair of multimode numbers that can be arranged in serial or parallel paths. There are 12dB and 24dB variants, and the resonance can be driven into self-oscillation. If that's not enough, you can engage the Drive function for some serious grit.

Modulation is offered in the form of a trio of syncable LFOs, with the usual complement of sine, square, saw, triangle, random and sample-and-hold waveforms. The quartet of envelope generators is slightly less pedestrian, with four- and seven-stage varieties available, half of them loopable - looping envelopes are especially cool when used to sweep through a wavetable.

Two of the envelopes are hardwired to the amp and filter, but that doesn't preclude them from also being used as sources for the other 50+ destinations via the mod matrix. We were also pleased to see the individual envelope stages available as modulation targets.

A fully customisable and highly flexible arpeggiator is present. You get 16 steps to play with and can adjust accent, timing, note length and pauses. Up, down and alternate modes are provided and you can also sync the thing to incoming MIDI clock.

Each of the instrument's four layers can draw upon a pair of effects slots. You can choose from Chorus, Flanger, Phaser, Overdrive, Delay and Reverb effects, though the latter two are only available to slot 2. The effects aren't anything to write home about, but they will add some gloss to your patches.

A lot of manufacturers and developers claim to offer wavetable synthesis. However, often their claims are a misappropriation of the term - instead, they turn out a run-of-the-mill ROMpler. Serious synthesists apply the term to the dynamic wavetable synthesis first seen on Wolfgang Palm's legendary PPG Wave series of synthesisers.

The oscillators in these instruments call upon a series of single-cycle waveforms strung together in a linear fashion and stored as a 'wavetable'. This technique provides hundreds, if not thousands, of waveforms from which to choose.

More importantly, these can be accessed dynamically, so that an envelope generator can, say, modulate wavetable position, creating sounds that morph over time. This makes a wavetable synth ideal for slow, evolving pads or grainy timbral shifts.

Largo brings with it 68 wavetables from some of Waldorf's most popular instruments. There are ever-changing formants, resonant bell tones, modelled strings, haunting digital soundscapes and much more. With a staggering number of modulation sources on tap, there's no shortage of ways to animate them.

The original PPG and MicroWave were at turns gritty and harsh, soft and sublime, plus they also mustered some wickedly spiky basses that could cause severe whiplash. However, Waldorf's later instruments traded that cold, digital sting for a warmer, buzzier character. Nevertheless, when pressed, these could also dredge up some hard-edged basses.

As you might expect, Largo tends towards the thicker, hazier sound of Waldorf's latter-day wavetable synths. Unfortunately, many of the factory presets are generic and unimaginative, with too many being of the 'trance sting' variety or exercises in noodlery. Few of them show off the specific qualities that could make Largo stand out from the virtual crowd.

Having said all this, there are some winning presets to be found here, including some terrific, evolving pads and a couple of rhythmic patches that might give Korg's Wavestation a run for its money. We recognised some of the gimmicks from the MicroWave series (the 'talking' patches) and there's a smattering of tasty digital bells to be had, along with a couple of swept wavetable patches that put a new spin on an hoary old trick.

Disappointingly, none of the presets showcase that special, aggressive bite that's typical of the instruments from which Largo's wavetables are taken. Mind you, it's more than capable of producing those sounds, and with only a little tweakery, we were able to dial in reasonable facsimiles of our favourite wavetable synth patches.

While we're on the subject of presets, it should be noted that thumbing through the patches in Largo's built-in browser is not without its difficulties. Some of them take many seconds to load and clicking on the increment arrow often results in rapid, uncontrollable advancement through the patches. Frustrating. Therefore, you'll want to use your host's patch browser where possible.

All in all, Largo is a good synthesizer with the potential for greatness. The experienced synthesist could have a field day with the vast modulation options and rich, dynamic wavetables, and we have no doubt that clever programmers will whip up some killer sounds

If you want motion-filled pads or weird rhythmic effects, Largo has got the goods and then some. As for those classic wavetable patches, you may have to hunker down for some lengthy sound design sessions.