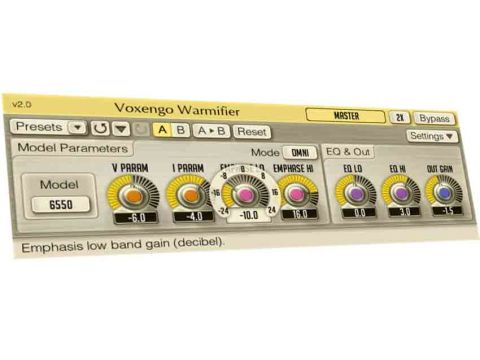 Want to inject digital mixes with a bit of analogue juice? Warmifier is still one of the best - and cheapest!

Voxengo rarely fail to impress with their ever-expanding range of keenly priced, pro-quality processors. Recently updated to version 2 (almost a decade after v1's debut), the acclaimed Warmifier is now available for Mac as well as PC, and boasts the full gamut of standard Voxengo niceties.

The first thing that needs to be understood about Warmifier is that it's a very subtle effect; the sonic difference between a solid state mixer channel and a valve one: not exactly night and day, but certainly audible in the form of a warmer, more energetic, arguably more cohesive sound than the latter.

It offers a choice of seven different valve models, each with its own character. The V Param and I Param knobs are used to dial in the base saturation. You can't approach these controls as you would the drive knob on an overdrive or distortion unit - this is literally a valve, a single component rather than a complete box of components (EQ notwithstanding), requiring finesse on the part of the user.

The Emphase High and Low knobs control a pair of shelving filters used to emphasise the saturation response towards low and high frequencies. They're bipolar, so increasing Emphase Low boosts the low-end saturation, while lowering it beyond 0 boosts high-end saturation - and vice versa for Emphase High. The two can be used together, of course, for combined/double weighting.

Two overall modes of dynamic response are available: Omni and Level Dependent. In Omni mode, everything gets processed equally, no matter how loud or soft. In Level Dependent mode, the amount of saturation applied depends on the signal level - quieter signals getting less, louder ones getting more.

Warmifier's a gentle creature at the best of times, but in this mode, it's positively featherlight. Finally, low and high shelving filters at 143Hz and 2.8kHz enable topping and tailing prior to processing.

While Warmifier's processing algorithms might be rather old, they still sound warm, classy and convincingly 'tubular'. Used on single instruments, it adds bite and grit, with the Emphasis controls enabling broadband tailoring of specific frequency ranges, be it low-end for a bass or kick drum, or high for a vocal or guitar. On mix busses, the valve colouration brings with it a certain amount of 'gluing' - particularly beneficial on drum groups - while Level Dependent mode works well on full mixes, where subtlety is key.

Those without previous experience of harmonic saturation, hoping for instant mix-improving magic, will likely be a bit disappointed by the delicacy of it all: taking the time to learn the nuances of each valve type applied to a variety of material is essential.

Warmifier might not have the overt 'wow factor' of, say, Kush Audio's UBK-1, FabFilter Saturn, PSP VintageWarmer or the various DSP-powered UAD options, being a far more simple, stripped-back (and thus less blatant) effect.

For those who know what they're doing with it, though, it could well become a ubiquitous insert on their DAW mixer channels and busses, bringing authentic analogue warmth to everything it touches.