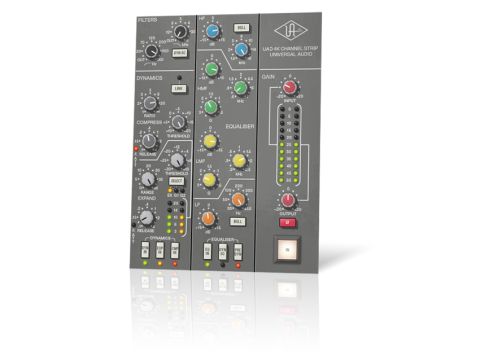 At long last, UAD users can enjoy that hit-making SSL sound, although UAD-1 owners might be better off upgrading to UAD-2 beforehand

Fully endorsed plug-in emulations of Solid State Logic's legendary studio gear are available via SSL's own Duende DSP platform and, for those who prefer a native solution, the Waves SSL 4000 Collection.

However, Universal Audio sees no reason not to create 'unofficial' emulations for its own UAD DSP platform, and to that end it's released the 4K Channel Strip and 4K Buss Compressor, both derived from the famous 4000 series consoles.

The 4K Channel Strip we're reviewing here is modelled on the later G+ design, but with the optional - and more popular - E Type 'black knob' EQ. Visually, the 4K Channel Strip captures the pale grey of the latter G-Series desk, but aesthetics aside, the three big selling points are the powerful EQ, simple dynamics options and flexible routing.

SSL desks are renowned for their flexible routing, and even within a single-channel strip there are useful options to assist processing. The 4K's basic processing order is filters>dynamics>EQ. However, with a single button press, you can place the EQ before the dynamics module, which is great if you need to control the results of some heavy EQing, or want to EQ 'into' the dynamics for added effect.

Even more significant is the option to route the filters, EQ or both to the sidechain of the dynamics. Again, it's one button press for each, with the compressor and gate affected simultaneously. Use the Filters option to fine-tune gate behaviour, or the full EQ option for frequency specific compression, such as vocal de-essing.

Both options mean you can try things out quickly. The only downside is that the respective EQ or filters are then no longer part of the audible processing chain.

The 4-band EQ has two fully parametric and two shelf/bell filters, with powerful +/-15dB gain. In addition, you also get separate high- and low-pass filters, and it's these six elements combined that produce an EQ that's precise and musical, hence its enduring popularity.

The SSL 4000 dynamics section is VCA-based and the simple controls belie its power and flexibility. The compressor facilitates anything from subtle level control to full-on limiting, and although there are only two attack settings, the fully-adjustable release and ratio give plenty of control. Also fundamental to the design is the ever-present automatic gain make-up.

Back in the day, the onboard gate/expander was vital for keeping tape noise at bay. It's incorporated here with three modes, including the 'no-chatter' gate option, and is useful as a creative effect as well as for knocking out noise.

Unsurprisingly, the 4K Channel Strip emulates the SSL sound very well. Anyone familiar with the original will find the routing options easy to use - the gate and compressor gain reduction metering feels just right, too.

Sonically, the EQ works great for subtle enhancement of guitars, heavy EQing of drums and plenty in between. Also, the input/output level controls and twin meters come in handy if you're pushing the EQ very hard.

The compressor behaves well, with the fast attack option brilliant for hammering sharp transients. However, in use, you'll find that the three knobs (Ratio, Threshold and Release) can produce a wide range of results, so accurate dial positioning is paramount.

Finally, it's worth noting that you can use the strip on stereo channels and, with the Link button engaged, the imaging will stay central.

UA's 'best bits' approach means that the 4K is less well-equipped than both the Duende or Waves options. It's also worth noting that not only is there no SE version, but also that the 4K Channel Strip uses much more DSP than the Neve 88RS - a maximum of four mono instances on a UAD-1 versus 13 mono for the Neve 88RS.

If you're a UAD-1 user, you may feel that this is pushing you to switch to a UAD-2 (though that would be no bad thing in itself).

Minor gripes aside, it's great to finally see an SSL-influenced channel strip for the UAD platform.