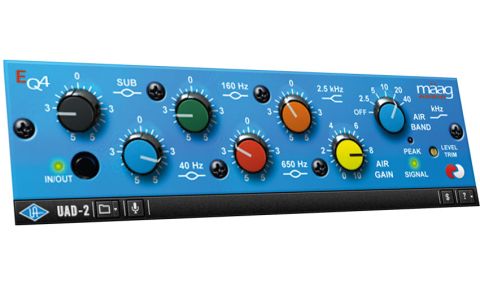 If you have your main EQ bases covered, this will provide you with something different.

Alongside the Fairchild Tube Limiter Collection, which significantly updates the Fairchild 670 emulation, Version 7.4 of UAD's software contains a new emulation of the coveted Mäag EQ4. This 500 series EQ module has proved popular with many a mix engineer and it has made its presence felt on records for Madonna, Pink, Black Eyed Peas and Justin Timberlake, among countless others.

Despite its unusual feature-set, its characteristic sound is to provide a warm, musically pleasing result across its six frequency bands. Used together, or in isolation, they bring an almost 3D quality to elements of a mix. The EQ4 has been developed by Mäag Audio in conjunction with Brainworx, further strengthening the relationship between the latter and UAD.

The EQ4 couldn't really be any simpler to operate. Its 500 series 'vertical' arrangement has been redesigned as a 'horizontal' plug-in, however, that aside, it provides the same controls. Unlike most EQs which traditionally offer three controls per band - frequency, bandwidth and cut/boost - the EQ4 instead only offers cut or boost, with no option to change the frequency or bandwidth for any of its filters.

The first five of these are fixed at 10Hz (labelled 'Sub'), 40Hz, 160Hz, 650Hz and 2.5kHz, with a rotary control providing between -5 and +5dB of gain for each. However, the top-most band provides the EQ4's most famous feature and is labelled Air Band. This offers a selectable frequency at either 2.5kHz, 5kHz, 10kHz, 20kHz or 40kHz (as well as an 'Off' option for bypass) which can then be gradually enhanced via the yellow dial below and to the left of it.

The concept of adding 'Air' to a sound isn't unique to the EQ4 and yet the result here is extraordinary, halfway between a regular EQ and an Exciter-like treatment, somehow managing to avoid the 'artificial' nature of the latter.

The EQ4's only additional control is a small Level Trim dial on the far right-hand side which you'll welcome. The musical nature of the EQ4's sound means you'll often drive it to internal distortion inadvertently.

Our only gripe is that the interface is so small, which is a particular surprise after Brainworx's previous design for UAD - the ENGL Amps - occupied plenty of screen real estate. It's no exaggeration to say the GUI could usefully be twice its size.

In comparison to other EQs, it's easy to see the EQ4's lack of bandwidth and frequency controls as serious limitations. What if you want to EQ frequencies between those labelled on the front panel? Equally, what if you want to make a band narrower or broader? Well, you can't. Accordingly, this is not the EQ to turn to if you need to make surgical chops to a specific problem frequency.

Instead, it's a uniquely-appointed tool for enhancing key frequency areas and, either used on its own or after an EQ for making the kinds of tone- changes mentioned above, it can produce extraordinary results. Its Air Band is its most seductive feature and, once heard, you'll find it hard to ignore thereafter.

However, whether you are looking for extra warmth in acoustic guitars, more weight in kick drums, more presence in electric guitars, or more snap in snares, you'll find a wide range of highly pleasing results can be achieved with its other bands too. So, whilst the Mäag EQ4 has to be filed under 'Specialist Item', it's likely to still prove to be one that you will turn to time and again.