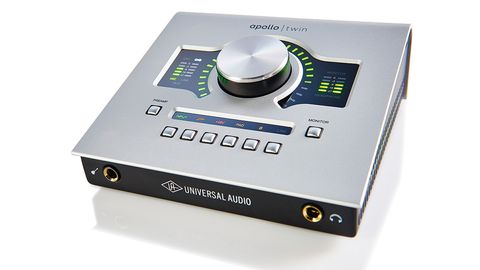 Universal Audio's Apollo Twin first landed at NAMM 2014 and everyone flipped at the prospect of having 'UAD-2 plug-in power' in a small, convenient but still very powerful package.

Well, everyone except the poor old Windows PC user that is. Announced last autumn was the news all PC owners (this reviewer included) wanted to hear, with UA releasing the Apollo Twin USB.

Straight out of the box and the aluminium and highly perforated steel chassis is reassuringly sturdy; everything here is the same as the Thunderbolt version. The unit features the same two in, six out configuration.

On the rear panel you have two mic/line combo input ports; next to them is the Monitor out left and right and two further Line out 1/4 inch sockets. The rest of the rear panel is taken up by power switch and socket, USB 3 type-B port and Optical In for an additional eight inputs.

Around the front of the box and the I/O is further complemented by the Hi-Z input and headphone output. The top panel remains unchanged with switchable monitoring and preamp functions all guided by the large rotary.

Inside the unit and the only discernible difference is that only the Duo (two SHARC processing chips) is on offer, with no Solo version available.

So far and there is very little to separate the USB and its Thunderbolted cousin, bar one seemingly insignificant and yet extremely welcome thing. The USB cable is included in the box! How many of you out there have purchased a Thunderbolt product only to find that the Thunderbolt cable isn't included?

The original version does have one up on this edition and that is the ability to chain up to four Apollo units together. It seems USB 3 protocol does not allow for this, but is that really much of a problem?

Not being able to chain several units together isn't a game changer here; that's not what the Twin is all about. If you're in the market for just a two-input interface, you know that is all you'll need; having the option of the optical input for eight extra channels is just pure bonus.

The Apollo comes with the hugely improved Console 2 software, which allows you to track and monitor with real-time plug-in processing with near-zero latency, access Apollo's features and settings remotely and set up routing with your DAW.

Also included is the Realtime Analog Classics plug-in bundle and, although it's not filled with the latest plug-ins available on the UAD-2 platform, there are some real classics in the form of the 1176LN and SE models and you will use them, a lot.

There's plenty of dynamic processing here to keep you sated for a while, but it won't take long before you are wanting more from the huge, tempting catalogue of plug-ins on offer. For instance, the bundled free Softube amp emulation plug-ins are okay, but not the most characterful. Both UA and Softube have released far better emulations in the last couple of years.

At the time of writing UA state that Windows 7 or 8.1 is required to run the plug-ins, but we tested it on Windows 10 with no issues.

Apollo's Console 2 software means you are still able to get the same near zero-latency as the Thunderbolt edition. However, remember that this is still a Duo, not a Quad or Octo, so you may be running out of DSP pretty soon.

At this price the Apollo Twin is the cleanest and one of the best-sounding desktop interfaces available, in part thanks to the 24-bit/192 kHz resolution and Unison technology, which imitates the characteristics of tube and solid-state hardware. Best of all though is that it is now available for Windows, and on behalf of all the PC users out there, thank you UA.