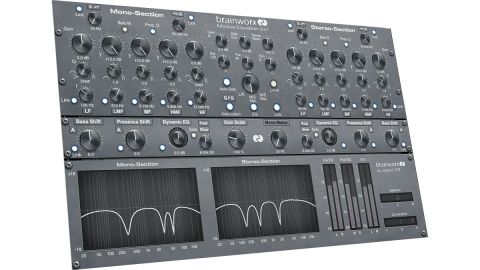 There's plenty to recommend here both for those already wedded to the UAD platform and to entice the as yet uninitiated.

Via Sony Oxford, the envelope shaper Envolution comes to the UAD platform, while the latest collaboration with Softube is an emulation of the Marshall JMP 2203 guitar amp.

Last, but by no means least, Version 3 of Brainworx's bx digital processor is available in both Mix and Master forms, allowing for controlled and impressive mid-side processing, among other applications.

Sony Oxford's latest processor, Envolution, now comes to UAD, to join the other processors in the Oxford suite released in previous UAD versions. Envolution is an Envelope shaper which lets you independently control the Transient and Sustain portions of a sound to enhance or soften the shape of an incoming signal.

These two stages have their own dials offering dB offsets, so that if you want to enhance transients by 2dB, for example, you simply dial in this amount of gain.

However, things are considerably more flexible than this, as it's possible for each stage to be frequency sensitive, letting you boost or tame levels with a selective EQ curve to target only the frequencies you wish to process.

The central area of the GUI provides a 'live' display of the incoming audio signal, while clicking the Freq button above or below lets you see the EQ shape for the Transient and Sustain portions.

Comprehensive envelope settings are provided for each stage, with both sections offering independent Attack, Hold and Release dials, while a Mix dial in the output section allows for easy parallel treatments. This is particularly helpful as it's extremely easy to create wild, sharp treatments with Envolution which, on their own, can sound too extreme.

Blending some of this shaping with the original source sound often works wonderfully, allowing you to add bite to percussive sounds in particular. However, applications go much further - adding Sustain brings up the body in a sound as it decays and works brilliantly on drum overheads where you want a denser, more saturated sound.

With its parameter set, Envolution can match the capabilities of 'other' processor techniques. It can be used as a quasi EQ, an alternative to Exciters and even as a kind of compressor, particularly if you soften Transients while boosting the Sustain portion. It might seem like a specialist plug-in but its applications are impressively broad.

The original version of Brainworx's bx processor was voted 'plug-in of the decade' in these very pages, so V3 is built on some impressive heritage. Originally designed by Brainworx's founder Dirk Ulrich, it has become a go-to choice for mix and mastering engineers seeking mid-side processing, precision EQ treatments and 'speciality' processing, such as de-essing.

The most significant developments in Version 3 are that the options for each EQ band and filter sections have been expanded with extra slopes and types, while a 'proportional Q' mode gives the option for bandwidth to become narrower and more focused as gain is increased.

This models the behaviour of SSL and API consoles and rewards bold EQ treatments. The Dynamic EQ section replaces the De-Esser section as Brainworx is, no doubt, keen to make users realise that frequency-sensitive gain reduction has applications beyond taming sibilant signals. Brilliantly, this now allows for gain increase (as well as reduction), so if you target a particular frequency and want to give it more pep, you can.

All of this builds on the existing heritage of the original bx, which continues to provide 11-band stereo EQ, with dedicated modes for mastering and recording, the latter offering a mid-side matrix for this popular microphone technique.

Indeed, its capabilities in terms of widening (or reducing) the stereo picture of signals is where it has found much favour; its Mono Maker is perfect for folding low frequency signals towards the centre of a mix, while its image enhancement tools are great for widening and exciting signals higher up the frequency charts.

UAD plug-ins aren't cheap but Universal Audio's digital division is synonymous with offering some of the best plug-ins money can buy and its reputation marches on with Version 8.5 of its software.

Envolution arrives here fairly quickly after its 'native' release from Sonnox, while the range of Marshall amplifier emulations is growing nicely offering those using UAD's Console software another real-time amp emulator which can be monitored or printed at the recording stage.

Brainworx's bx processor is already a legend in its own lifetime and to have the latest incarnation here, using UAD's processors rather than those taxing your computer's CPU, is a welcome addition.