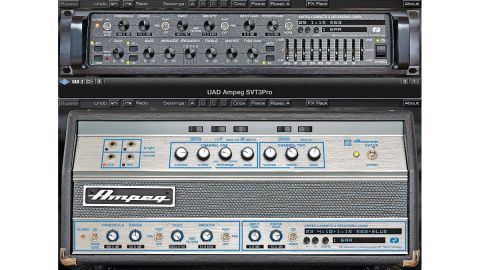 The Ampeg emulations offer a wonderful sound too and further strengthen the partner relationship between Brainworx and UAD.

These aim to capture the tone and power of the hardware they replicate and they offer a configurable feature-set which will be familiar to anyone who has used Brainworx's other amplifier models for the UAD platform.

The amp section of the SVT-VR provides emulation of the hardware's 300-watt tube design alongside its 8x10 cabinet to produce huge, powering sounds. The amplifier provides two channels, with each featuring its own Normal or Bright option, so you can configure independent treatments before comparing and selecting the one of your choice.

The first channel features three-band EQ, with an ultra-high switch varying the amount of treble output. Equally, the mid-range band can be selected at three alternative frequency settings, with bass roll-off also user-configurable. By contrast, the second channel offers a two-band EQ.

As is becoming traditional with Brainworx software, the amp is enhanced by an FX section, which can be toggled on/off via the FX Rack button in the plug-in's control section. This provides a Noise Gate and Filter in its bottom left-hand corner, both of which are effective for reducing amp noise if things get out of hand.

Meanwhile, the bottom right-hand corner lets you choose from a variety of cabinet settings and recording chains, which pair cabs to modelled microphone recording channels. There's also a Power Soak option to attenuate cranked treatments to socially acceptable levels, dramatically increasing the amount of rasp you can usefully work with.

Similar recording chain solutions are offered for the SVT3-Pro, which is slimmer in appearance but equally capable of sonic hugeness. The amp here provides EQ dials at the Bass, Midrange and Treble stages, with a five-way selectable frequency dial for the Mid band. There's also a nine-band graphic EQ availablehere for further sonic shaping.