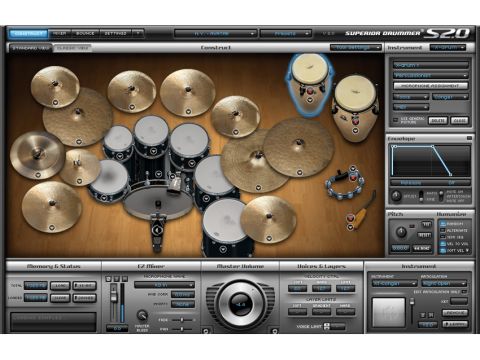 Easy to use, slick as you like, and with a 'superior' sound, SD 2.0 has beaten back the competition to claim its place as perhaps the best drum ROMpler going.

It's been four years since Toontrack released their original dfh Superior drum ROMpler. Since then, other similar instruments have appeared (BFD2, Addictive Drums and Strike, for example), and Toontrack have even released their own affordable, more intuitive alternative: EZdrummer. However, there have been no major changes to the original plug-in, and it's fair to say that it definitely lost its edge somewhat. So maybe it's appropriate that Superior Drummer 2.0 not only marks the first phase of Toontrack's New York Studio Legacy Series library, but also the release of a completely overhauled program.

The big news with S2.0 is that it follows the now industry-standard layout, with separate drum kit and mixer views. If you do feel nostalgic for the original version, the 'main' super-pad screen or 'classic view' can be selected instead, though they've done away with the convoluted construction pages. All kit-building now takes place in the main interface, with microphone bleed levels handled on a fader-by-fader basis in the mixer window - clicking the Bleed selector next to a fader opens up an additional Levels tab.

In terms of kit construction, S2.0 includes a few basic layouts, and beyond that you can also augment kits with so-called X-Drums. These are essentially extra instruments that you define and allocate samples and mics to - they then appear in the main kit window with a graphic. You can have a total of 45 kit positions, including those in the presets list, which is pretty impressive and enables truly monstrous designs.

S2.0 ships with the first volume of Toontrack's New York Studio Legacy Series library, which was recorded at NY's Avatar Studios (formerly The Power Station) by Pat Thrall, Neil Dorfsman and drummer Nir Z. It's a 60GB library, reduced to 20GB on disk using lossless data compression. There are also three slimmed down installs available, 4GB being the smallest.

With the full install, you get to choose which sticks (sticks, brushes, rods or mallets) and kick beater (wood, plastic or felt) to use. The basic kit comes from US company GMS, but is augmented by additional pieces. You get three kicks, seven snares (including a Ludwig Black Beauty), three hi-hats, four rides, five cymbal sets, two types of tom and cowbell. For added variety, the kit sample recordings include some additional microphone options. These were processed at source to retain phase coherence, and include an 1176-processed snare mic and another with Sure Green Bullet-recorded room ambience, processed via a Boogie amp.

Finally, as well as overheads, there are five room mic options, recorded with Coles, U67 and C24 mics, among others. However, given the additional memory required, not all of these load automatically, even when you fire up the full kit. Once we got the hang of this, the level of variety available - even before we reached for the onboard effects - became apparent.

In use, although the window itself is dominated by either the drum kit or the mixer, the bottom quarter of the screen remains constant at all times. Here you'll find memory status, master volume, and detailed parameters for each instrument, including velocity parameters and key assignments. The instrument section in the right corner is the best place to audition kit sounds, as it's context-sensitive - alas, the main kit graphics aren't.

S2.0 is fully compatible with previous Toontrack libraries, including dfh Superior and EZdrummer, although you can't mix and match kits freely. You can, however, add X-Drums to combine elements of different libraries.

Out of the box, S2.0 is as easy to program as any other drum ROMpler, and with extra snare and hi-hat articulations on separate notes, in time, you'll learn to create convincing drum parts from scratch, However, if speed is of the essence, the included EZplayer pro plug-in instrument includes a large library of MIDI grooves. It also has its own multi-layer arranger, and it will even convert its MIDI mapping to match other popular drum ROMplers, such as BFD and Addictive Drums. Its drag-and-drop functionality enables you to simply import grooves onto S2.0 instrument tracks for instant results.

In addition to being used from programming realistic percussion tracks, drum ROMplers are also employed as instruments to be triggered live by drummers playing electronic drum kits. Although designed primarily as a plug-in, S2.0 includes a standalone host app called Toontrack solo, and this is your best bet when using an electronic kit. Select the E-drum preset from the MIDI/controller list and you'll get mapping suited to most mainstream digital drum hardware. If you have electronic hi-hats, you can even fine-tune the response with the CC offset option.

Operationally, S2.0 is much slicker than its predecessor, and this isn't just down to the more logical workflow - the engine also seems to have been improved. With instruments of this type, shifting such large amounts of data sometimes results in the odd buffering click or pop, but we experienced none of that with S2.0.

Ultimately, if we do have any criticism, it's that there is a 'sameyness' to the sound of the library, no doubt imparted by the studio room itself. Even so, with Volume 2 available next year, you'll be able to add the sound of Allaire and the Hit Factory to the mix. Overall, then, S2.0 is considerably better than its predecessor, and arguably the best in its class.