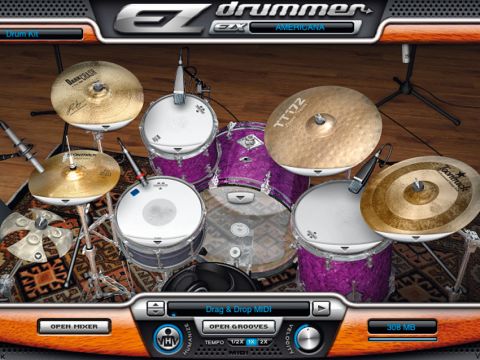 Take your time and you'll love its simplicity.

As a genre, Americana spans quite a wide range of styles - from the rootsy alt-rock of bands like Counting Crows, Matchbox Twenty or The Wallflowers to the out-and-out country twang of Dwight Yoakam or Brad Paisley.

In short, it's the place where American folk music - blues, country, bluegrass and rock'n'roll - combines.

"Americana requires a bit of tweaking and processing to get the sounds just right."

One aspect that's common to a lot of Americana is its drum sounds. Typically these are no-frills, but very well recorded, planting the listener directly in the live room - and that's what Toontrack's EZX Americana sample pack is all about.

As with other EZX packs, you get a 'blank' kit that is then filled with samples. For this release, you have the choice of four snares (Ludwig Black Beauty, a Ludwig CoB played with brushes and a Tama Wood Hoop with the snares either on or off).

The toms range between 12" Fibes and Ludwig (rack) and either a 16" Fibes or 14" Ludwig floor toms. Likewise, the kicks are also Fibes (16") or the matching Ludwig Burgundy Sparkle (22"), with all of the Ludwig shells captured with brushes or while the snares were either on or off for consistency.

You also get slots for two crash cymbals, a ride, hi-hats plus a percussion pad containing a Factory Metal Percussion Cross Crasher and Celtic Bell, and a Plugs Percussion Sizzle Strip.

Listening to the demos on Toontrack's website beforehand, you can really get a feel for what these samples are capable of. They're live sounding and organic, but loading up the pack reveals that perhaps the realism is almost too good.

Unlike some of Toontrack's other efforts, Americana requires a bit of tweaking and processing to get the sounds just right. They were captured in the smallish live room at The Congress House studios in Austin, Texas by producer Mark Hallman and as a result, the samples are fairly dry.

While this is intentional, it won't be for everyone. The snares sound thin, and they're tuned at a medium-high pitch. Detuning them electronically doesn't help to fatten them up, rather resulting in that "music cupboard snare tuning" you'll remember from school.

However, we really like Americana. With a bit of processing and tweaking of the kit configuration, it's possible to get close to the sounds on the website.

The Ludwig kit paired with the Tama Wood Hoop snare is this reviewer's favourite, with the Ludwig shells tuned for a rounder, more focused sound than the Fibes' slightly plastic open tuning. The addition of the 16" kick and percussion pad are welcome, too, even if you don't choose them every time.

It'll take you a while, but once you get used to the feel of Americana, these sounds reveal themselves to be a set that you'll keep coming back to.