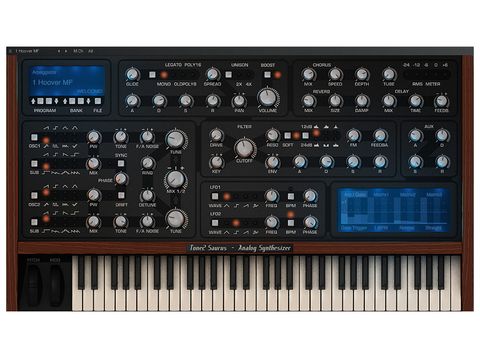 Beautifully designed and with some modern niceties, Saurus has a fabulous sound and a very appealing price tag.

Developers have been taking a different approach with their analogue synth emulations lately, sacrificing CPU cycles in order to meticulously model the smallest details of analogue synthesiser circuitry.

The results are stunningly realistic emulations such as u-he's Diva and FXpansion's DCAM: Synth Squad. Tone2 claims its new instrument, Saurus, is likewise modelled down to the component level, but that it doesn't make excessive demands on the host computer. Saurus is available in VST, AU and standalone formats, and it'll run on 32- and 64-bit machines.

First impressions are often hard to shake, and on first blush, Saurus doesn't come off like a retro synthesiser. Why? Because the default preset isa modern take on the ever-popular Hoover sound.

Not, mind you, the 25-year-old 'What the' patch from the Roland Alpha Juno 1, but rather a sequenced, processed and thoroughly modern-sounding variation thereof.

A scroll through the voluminous preset library reveals the instrument's versatility, however. Wobbly dubstep basses and thumping industrial drum beats sit beside funky '70s Minimoog basses and Oberheim-alike brass. The obligatory (and sometimes copious) slathering of delay, reverb and chorus effects ensure that Saurus's sounds are lush and 'produced', rather than raw and bare, as they would have been on an ARP Odyssey or Minimoog back in the day.

The architecture is conventional: a pair of oscillators (each with a corresponding sub-oscillator) is mixed and routed through a multimode filter before being plumbed through some effects. There are a few familiar modulation options immediately on tap, and many, many more possibilities hidden under the hood.

Saurus' oscillators are far more complex thanthose of your basic analogue hardware synth. You get the usual waveforms - saw, square, pulse - along with a few less-common shapes; but more importantly, each waveform (not just the square) is subject to pulse-width modulation. This immediately broadens the sonic possibilities.

The sub-oscillator offers a slightly different set of waveforms from which to choose. This again breaks from tradition, where the sub was limited to only a couple of waves. Each
sub-oscillator can be mixed with its associated oscillator, and you can feed noise into either oscillator's path. Detuning and ring modulation are both on tap, as is oscillator sync, and you can lock the phase of both oscillators together. A Drift control adds some analogue-esque slop.

The filter section offers six filter types from which to choose, comprising 12dB and 24dB variations of low-pass, band-pass and high-pass modes. There's a gutsy Drive function, and the resonance whistles like a banshee when pressed.

A Soft Resonance button can dial back some of the squall if it gets too much, while you can dial in some filter feedback if you want a little more screech. The filter has a dedicated frequency modulation knob and, of course, its own envelope generator (ADSR) and key scaling.

There are two further ADSR envelopes - onededicated to the amp, the other assignable. Additionally, a pair of LFOs is onboard, each with four standard waveforms to choose from and tempo sync. You can adjust the phase sync of the LFOs and they can be pushed into the audio range - a nice feature that we don't see nearly as often as we'd like.

A synth with as many dance-friendly presets as this one is bound to sport unison modes for denser tones. This is also useful for emulating certain three- and four-oscillator synths of old.

Another dance must-have comes in the form ofa particularly tasty arpeggiator that features many playback modes, including various chord and octave options. You can draw in the steps you want to hear, play around with the playback order, add swing and more; it's a superb implementation that manages to cram a lot of power into minimal screen space.

The effects are pedestrian: we're talking delay, reverb and chorus, each with a Mix Amount knob and the barest complement of features. The delay offers Time and Feedback, the chorus gets Depth and Speed, while the reverb provides Size and Damping. Tube distortion is provided, too.

Saurus boasts a fantastic modulation matrix. While most offer a smattering of useful modulation sources and targets that can be connected to one another, few offer the sheer number of options seen here.

Saurus lists over 50 (each) sources and destinations, and almost every imaginable parameter is game. Nearly every front panel control can be selected as a modulation destination, with the unfortunate exception of the effects knobs.

Some unusual destinations are included, too. You can modulate every single stage of all three envelope generators, and choose the matrix slotsthemselves as mod destinations.

The list of sources is even longer, with some unconventional inclusions such as Impulse, which sends a burst of control data to the destination. There are also useful items like Constant (ie, a fixed value, useful for certain modulation situations) and some mathematical modifiers such as Filter(X), X*X, Sqrt(X) and Limit(X) X+Value. These can be used to modify existing source values for deeper control (there's a corresponding target called X=Value).

Saurus may look a bit 'bread and butter' on the surface, then, but a close look at its modmatrix reveals a vast wellspring of synthesis power.

One for the history books

Saurus isn't breaking any new ground, but that's rather the point. Tone2 has knocked together an instrument that's friendly and familiar, with just enough modern functionality to make it relevant to the modern studio. Most importantly, it sounds good.

Does it possess the mojo of a dusty, corroded vintage machine? Not really, butit can be quite convincing at times and doesn't sound clinical by any means.

Unlike some products, Saurus didn't give our system any undue stress playing even the thickest of chords, although it did draw more juice than some other virtual synths. We never hit the wall, but some patches sent Logic's CPU meter up a fair few notches: a fair trade for a quality sound.

If you want to fool the vintage elitists on the synth forums, you might be better off with a no-compromise synth like Diva; but if you just want to get on with making music using quality analogue sounds without investing in a new computer, Tone2 has thrown you a bone.