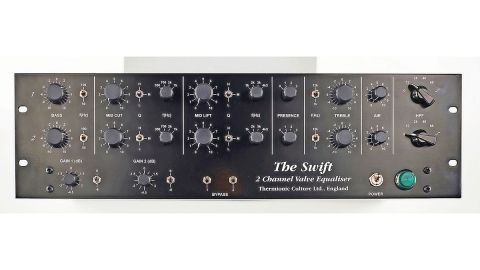 Beautifully constructed and without a doubt one of the very finest EQs we've seen. Truly wonderful.

The Swift is quite an impressive beast.

It's heavy, built like a tank and has a comprehensive set of controls. The design is based around a '50s EMI valve design with extended bottom and top response, and the Presence switch is from Thermionic founder and chief designer Vic Keary. The Mid Lift section is based on the classic Pultec MEQ.

The first test of an EQ is to listen to the output with everything set to zero and flick the bypass on and off. The Swift is remarkably transparent, and if anything just warms things up, sounding better than the original without any effort. The bypass switch is a proper one so you know you are making a true comparison.

Getting into the EQ we start with the Bass. This is switchable between 50 and 100Hz, is shelving and has a cut and boost of 11dB. Mid cut varies between 15, 10 and 5dB of maximum cut depending on the three Q settings (High, Medium or Low) and has four switchable frequencies.

Mid Lift works to the same principles but has a maximum boost of 17, 10 or 8dB respectively. Presence is very interesting as it adds around 4dB at the three different peak settings (0.9kHz, 2kHz, 4kHz) while the upper end of the curve drops down.

Like the Bass the Treble EQ is shelving, switching between 7 and 12kHz, and has a maximum cut and boost of 11dB. Air starts at 7kHz and peaks at 30kHz. Up full it's at +5dB at 11kHz so pretty powerful.

The Bass feels solid and strong with a very definite fast transient response which warms and fattens but doesn't soften. The mids do exactly what you expect so long as you remember that each Q setting has a different cut or boost amount, and the HF is powerful but smooth, again with a very noticeable transient ability.

Presence puts real focus into its specific frequency areas while Air does exactly what you would hope adding a lovely sheen to the top-end. The high-pass filter is excellent and in the last setting has something of the Pultec EQH effect when used in conjunction with some Bass boost.

The Swift is a truly detailed EQ which adds warmth, presence and depth to anything in need of a little help or some radical changes. It is clean and powerful and near silent in operation. About as good as a valve EQ can be.