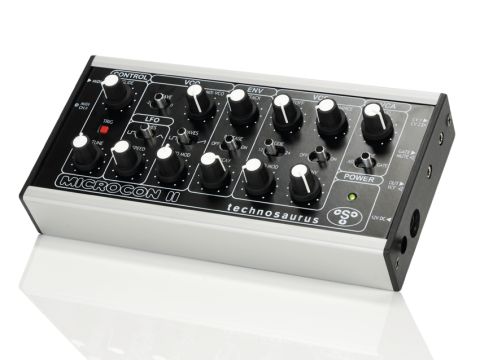 Squeaky acid and fat bleeps in a tiny form factor. Microcon II has more rivals than its predecessor, though.

The mighty Technosaurus has been around since 1996 when the company released the rather epic Selector analogue modular system. A year later, it came full circle and produced the bite sized Microcon.

Acid music was at an all-time high and everyone wanted the sound of the legendary Roland TB-303, so it's no surprise that the synth Technosaurus chose to build this time had a similar set of features. The Microcon II takes the original and adds a handy MIDI port for studio integration.

Microcon's circuits are housed in a solid metal case with a black and white silk-screened top panel. The dials are stuck strong and there's definitely no chance of these wobbling or snapping off at any point in time.

Initially, they feel a bit stiff to turn, but they speed up after a few sessions. The switches are all two-position types, the same kind you tend to find on DJ mixers and for the most part, their low profile keeps them out of the reach when tweaking the knobs.

MIDI gets plugged in the left side with a standard DIN socket, and since there is no Thru port this will have to be the last stop on the chain. To change the channel it receives on, you will need a small flat head screwdriver to twist the little recessed selector to one of its 16 positions.

The 12v DC PSU is plugged in over on the right side, and next to this is a slot for a stereo 1/4-inch jack. The tip and ring of the stereo jack are used separately so that one cable can be used for the regular mono audio out, and to route a mono signal back in to feed the VCF. If a normal mono or unbalanced cable is plugged in, then this will carry the audio out signal only.

There are two more sockets on this side: these are both balanced mini-jacks and work the same way, with each one carrying two separate signals. The first outputs CV1 and CV2 to patch into another analogue synth or module. CV1 is the on the tip, and outputs the VCO pitch, while CV2 is on the ring, and is linked to the modulation wheel, aka MIDI CC1.

The second mini-jack socket fires out the Gate signal on the tip, and the ring is used as an input to mute the OSC. This might seem odd, but it's necessary if you fancy using the VCF input as there is no other way to take it out of the mix otherwise.

The top panel starts (from left to right) with the control section. Here you'll find a dial to adjust the Glide rate, another for tuning, and a little red trigger button so you can hear the sound.

The VCO section begins with the analogue oscillator. This can be switched between square and saw shapes, while another switch drops it up and down by two octaves. The raw sound is reinforced with a sub oscillator set to a square. A mix control sets the levels between them, while the pitch can be modulated via the LFO.

"There's no denying that the Microcon packs a sweet analogue sound into a tiny space."

Microcon offers square and triangle shapes - on a switch, naturally - and a dial to set the speed. The two-page manual doesn't list the speed range, but it goes from around eight secs at the slow end, to fast enough to produce some nice buzzing, metallic FM tones.

Sandwiched in the middle of the box is the ENV section. This is the only envelope onboard, so this means the VCA and the Filter have to share it.

The VCF section features a switchable 12dB/24dB low-pass filter with resonance control. The 12dB filter has a slightly brighter, buzzier, grungier tone to it that provides a nice contrast to the regular 24dB sound.

Mod sources include the LFO, ENV and CV, which switches on key-tracking for the cutoff point. The Mod wheel can also be used to control the cutoff point over MIDI, and can be used over three-quarter of the filter's full range.

There's no denying that the Microcon packs a sweet analogue sound into a tiny space. Sound-wise there's nothing new here, but what it does do, it does well - especially those funky acidic bleeps. Certain limitations need to be accepted such as the lack of PWM, but other features, like the velocity-triggered accent envelope, may strike the balance for some users.

Unlike in 1997, the Microcon now faces some stiff competition - chiefly from Doepfer, MFB and DSI, all of whom produce synths that come in cheaper than this. While the latter units might not match the build quality, they are on par in terms of sound. Some idiosyncrasies, such as the use of stereo tip/ring cables to double up on signals, make it less convenient to work with than individual sockets for everything, but it does help to keep the size compact.

Listen to the Microcon doing its thing: