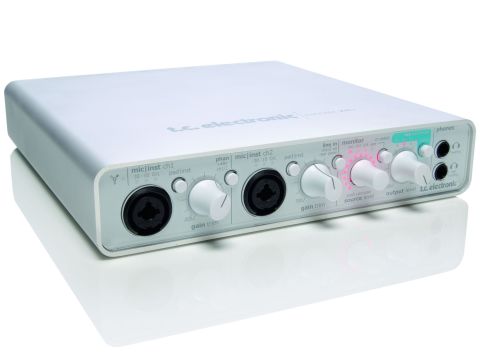 Despite its slightly limited effects, the Konnekt 24D is an audio interface of the highest calibre. TC have just made your purchasing decision that bit more difficult.

There´s certainly no shortage of good audio interfaces on the market, so it takes more than a few quality ins and outs to get us excited. But TC Electronic have always been a company worth watching, so when they announced their plans to launch a FireWire bus-powered multichannel interface with a tasty array of digital and analogue I/O and even some DSP thrown in, we couldn´t help but be intrigued.

Opening the Konnekt 24D´s box is a truly pleasurable experience. Finished in lush brushed aluminium, this is one of the most aesthetically pleasing interfaces we´ve come across. Throw in a small footprint and a dollop of connectivity and you´ll soon be wanting this thing sitting on your desk. Speaking of connectivity, the front panel offers two high-quality, dual-purpose, phantom-powered XLR mic or hi-Z guitar instrument inputs and two headphone jacks (the topmost of which automatically disables the main audio out when a jack is inserted - perfect for recording).

The rear hosts four 1/4-inch line leveljacks each for input and output, MIDI, S/PDIF and optical ADAT (or S/PDIF) I/O, two FireWire ports (for chaining other FireWire devices or up to four Konnekt 24Ds), and a DC power socket for using the unit in standalone mode. Installation of the supplied TC Near software is completely painless (although we had to download one of the plug-ins separately) and works immediately in your favourite DAW.

As soon as you throw a few audio sources at it (we tried a condenser mic, bass guitar, synth and electric guitar), you can hear the Konnekt 24D´s excellent circuitry and AD converters at work. TC made their name with classic, professional digital rack units and it shows here. Recorded audio is all but noise-free and is very clear.

There are plenty of nice-sounding interfaces on the market, though, as TC are clearly aware. As such, they´ve built in plenty of other touches. One of these is automatic detection of connections. The Control Panel software knows when something is connected to an input and shows it on the GUI. This can be seriously useful if you´ve tucked your Konnekt just out of sight and need to know if something´s actually plugged in!

From the point of view of live musicians, the best features are the direct monitoring and effects (see The PowerCore presence for more). One of the main issues with digital recording is latency, but the Konnekt enables you to hear yourself back - complete with internal DSP processing - without the signal going into the PC, being processed and coming back out again (creating latency). And because of Konnekt´s internal routing capabilities, effects can be applied to the outgoing signal without affecting what gets recorded. What´s more, latency is still pretty low when using the effects as inserts within your DAW.

As a further bonus, the Konnekt 24D can even be used in standalone mode, and an assignable parameter knob on the front panel enables control of various mixing parameters. Yet another nice touch - again belying this unit´s ‘desktop´ status - is a front panel analogue volume fader, which is perfect for those who have ‘mixerless´ active monitor setups.

As cool as Konnekt is, we do have a couple of niggles. The first is that the channel strip and reverb effects can´t be employed as proper inserts within your host DAW. To use them, you have to send the signal from your DAW out to the effects bus within Konnekt, then route the resulting signal back in (for the record, Fabrik C is on Konnekt channels 5-6 and Fabrik R on 7-8). Matters aren´t helped by a frequently less-than-clear manual that assumes too much product knowledge!

The effects are great for recording, then - offering direct monitoring and low latency - but those who want to use the C and R plug-ins for mixing will be disappointed that only one of each can be used simultaneously (and at 96kHz or higher, you can only use one or the other). With this in mind, if you´re not dealing with live musicians, you should consider the slightly lower-spec´d Konnekt 8 - essentially the same machine minus the DSP and some connectivity.

On the whole, though, the Konnekt 24D is a fantastic interface, and certainly one of the best solutions we´ve seen for the recording musician. It´s ideally suited to life on the road or in the studio, and when you consider that up to four can be chained (with direct monitoring available between them) you have to conclude that this is a device that´s a cut above the majority of the competition.