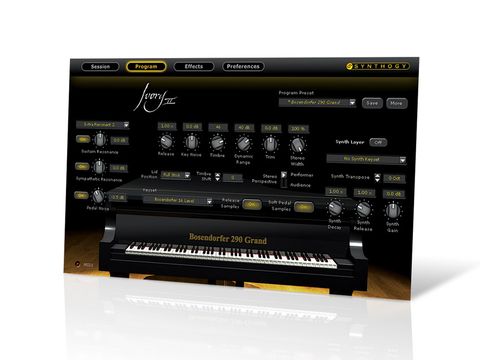 An excellent update to one of the best grand piano ROMplers money can buy, bringing it bang up to date.

Synthogy's Ivory was a standout sample-based piano instrument when it arrived, but Ivory II takes things to a new level of realism.

Ivory II Grand Pianos is a 77GB collection comprising a Bösendorfer 290 Imperial, a Steinway D nine-footer and a Yamaha C7. If those aren't quite to your tastes, Synthogy's separately available Italian Grand and Uprights have both also reached Ivory II status.

As with all large sample-based instruments, installation is a bit of a snore; it took about two hours to feed all eleven DVDs into our machine. Once installed and authorised (via iLok), there were no hiccups.

As well as the plug-in versions, there's a standalone version for Mac, and a version of Cantabile (a VST host) is supplied for PC users to use in place of a dedicated standalone executable.

The sound of Ivory II thunking down onto the test bench coincided nicely with the arrival of a Fatar VMK 188 Plus master keyboard. For our tests, we opened up the elegantly designed Ivory II in Pro Tools, which was hooked up to a Prism Sound ADA_8 interface and cranked through a pair of Focal Twin 6 monitors - a premium audio path that would easily show up any shortcomings.

The Bösendorfer sounded vibrant, real, instantly playable and entirely at home in this top-notch environment, and after a lot of enjoyable playing, we turned our attention to the numerous presets and parameters.

The three grands have differing tonal qualities, smoothness and tightness of tuning, overtone variation, etc. The Bösey came across as most natural, neutral and at home in its space.

The Steinway seemed softer and mellower, and the Yamaha the most characterful - we'd call it 'cronky' even, especially in the bottom end.

Almost every aspect of the instrument can be manipulated from the Program page. There's Soundboard Resonance (choice of eleven) and the new Sympathetic Resonance settings for starters.

Most useful are the Key Noise, Timbre and Timbre Shift controls, which can radically transform the tone and 'knock' of the piano and would be very useful if, for example, you wanted to thin out the sound in order to place it in a busy mix.

There's also the Synth Layer feature, which plays synth pad sounds alongside the pianos. The Session page offers control over the likes of voice/memory allocation, tuning and velocity, while the Effects page offers well-implemented chorus, EQ and reverb/ambience treatments.

In light of these comprehensive controls, it seems strange that there are no microphone or surround options. In the end, it's all about playability and great sound, and Ivory has both in abundance.

Its editability makes it truly flexible, and with the right master keyboard, you could lose hours just playing. That's the mark of a true instrument.