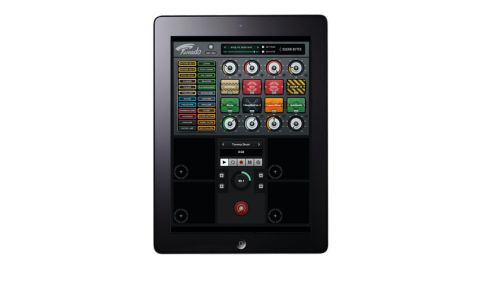 A few tiny control niggles aside, Turnado on iPad is every bit as good as its €119 plugin counterpart. Impressive.

There are two kinds of iOS music app: instruments and DAWs designed specifically for iPhone/iPad, and cut-down versions of established Mac/PC software. With Turnado, however, Sugar Bytes have established a new category: the full desktop port!

Apart from the addition of four X/Y controller pads, Turnado for iPad is identical to the 2011 VST plugin (read our Sugar Bytes' Turnado VST plugin review) .

A performance-orientated multi-effects processor, it allows up to eight modules to be loaded at a time from a list of 24. These include filters, delays, loopers, amp sims and more, and each one comes with its own library of presets.

Every module has its own edit screen, featuring four module-specific controls (Size, Damp, Width and Freeze for Freezeverb, for example), and a Main Controller knob that also appears in the initial overview screen and is hardwired to respond to movement on the X or Y axis of one of the four X/Y pads.

Every parameter can be assigned to the Main Controller for simultaneous on-the-fly adjustment via either the knob or the related X/Y pad, and every assignment has its own depth setting and response curve, enabling highly complex performance patches to be built.

For modulation, you get two LFOs and an envelope follower, which can be brought to bear on the effect parameters and the Dry/Wet mix. Finally, Dictator is an ingenious system for one- fader automation of all eight Main Controllers.

It all adds up to a flexible, intuitive and sonically spectacular hands-on virtual effects rack that's impressive and fun enough when just used to mangle its own bundled library of loops, but becomes genuinely useful in serious mobile production and sound design projects, deployed as an AudioBus Filter or Sender.

Our only complaint is that the switches and buttons are tiny (happily, the knobs aren't), which makes them hard to hit (and the zoom mode doesn't go in far enough), but that aside, Turnado on iPad is every bit as good as its €119 plugin counterpart.