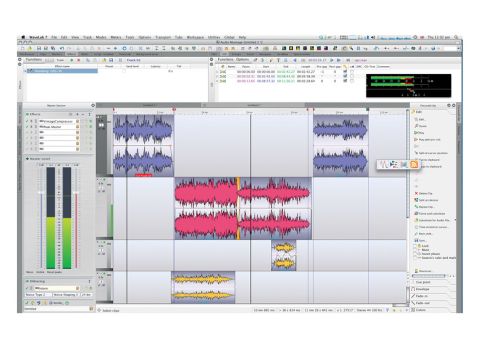 WaveLab is probably Steinberg's most cohesive and well-rounded product, capable of pretty much everything you could want from a modern audio editor.

When Steinberg announced WaveLab 7, the big news was that it would finally be available for Mac. Recently, they've also confirmed that their future products will only support Windows 7 and Snow Leopard.

Over time, WaveLab has grown into a powerful application, featuring everything from audio file editing to multitrack processing, recording and arranging. Editing can be either destructive or non-destructive, and the Audio Montage window enables you to apply clip-specific and master effects in real time.

Other aspects, such as metering and analysis, have grown to include lots of real-time and offline options, ranging from Oscilloscope and K-System level meters (real-time) to Loudness Distribution and 3D Frequency Analysis (offline). You'll also find Loudness Envelope and Spectrum Display views, and the latter combines with the Spectrum Editor for frequency-specific editing.

In the four years since WaveLab 6, Steinberg have been busy not only developing for OS X, but also pulling together existing WaveLab features into four dedicated workspaces.

You can load these up from a number of presets and customise them considerably by adding tabbed and floating windows, as well as rescaling and re-jigging the various elements. You can save the results as a custom layout, if you like. The Batch Processing and Podcast workspaces are quite task-specific, while Audio File and Audio Montage both deal with audio file editing, but from slightly different perspectives.

There is some functional crossover between the two (both have ten master plug-in insert slots), and you can drag files between them, but in practical terms, they suit different jobs.

Complementing the four main workspaces is the Control Window, designed for sub-hosting certain information (meters, for example), and most useful for those with two displays.

As you would expect, WaveLab 7 includes new plug-ins and now features over 30 VST3 effects from Steinberg's DAWs. Cubase users will recognise the RoomWorks reverb plug-in, while Nuendo's PostFilter is also here.

In addition there are 15 other plug-ins, including three restoration tools from Sonnox: DeNoiser, DeClicker and DeBuzzer. These deal with hiss, pops/clicks and hum respectively, and are available as inserts in all workspaces (including Batch). There are 13 offline processes that can be applied too.

WaveLab 7's disc-burning engine is all-new. This revamp improves stability and also supports DDP (Direct Description Protocol). So, you can now master and transfer electronically to the manufacturer without the need to burn discs.

In use, this all adds up to a better experience. For example, the floating switcher bar enables quick movement between workspaces, plus opening of files. You'll also find you can have multiple workspaces of the same type open. Combined with the option to drag files (or selections) between workspaces, WaveLab 7 is probably the most flexible environment we've used.

Of the new stuff, the Sonnox Restoration plug-ins demonstrate good pedigree, although they're simpler, both visually and in feature-set, than the full Sonnox Restore editions.

Also surprisingly good is the Batch Processor, which now lets you limit the CPU resources (number of cores) that it uses - that's great for background processing. The DIRAC 2.2 timestretching is impressively quick and sounds excellent, plus the Master Effects section now includes a gain-compensated 'smart bypass', which is something of which we strongly approve.

If you're new to WaveLab, it's worth us pointing out that there are 15 years' worth of cool features stuffed away in there. From nifty visualisations like the 3D Frequency Analysis and Oscilloscope, through to creative options such as effects morphing between clips and more practical stuff like flagging 'errors', such as digital clipping and clicks, WaveLab could never be accused of lacking functionality.

So, any downsides? Inevitably, the focused OS support will annoy some, although we tried it using OS X 10.5.8 and had no problems. Also, Mac users used to the swish look of Logic will probably find WaveLab 7 a bit drab, and we feel that the fonts and colours should be smartened up in future updates.

Finally, although we feel that the workspaces considerably improve workflow, the depth of features and plethora of icons could still be impenetrable to some new users. Overall, though, WaveLab remains an excellent product, with that long awaited Mac support boding well for its future.

Now listen to our audio demo to hear what WaveLab 7 can do: