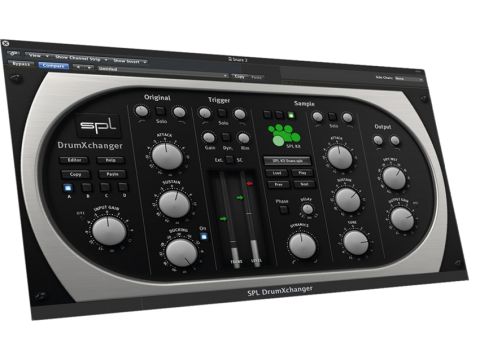 An excellent device that simplifies the process of drum replacement, particularly with difficult sources.

SPL's Transient Designer is probably the most original dynamic processor to have appeared in the last 15 years, and that product's technology lies at the heart of the DrumXchanger. So, having inserted it on a channel that needs a drum sound replacing, off we go.

Starting on the left you have an input gain control which gives +/-15dB, four preset buttons to store different settings of the device (with the ability to copy and paste between them) and an Editor button which accesses the page where you can build your own sample libraries.

Next up is the input stage. Here you can manipulate the source sound using the first of the two built-in Transient Designers, adjust it using high and low-pass filters and then set a ducking level should you want the spill, but not the sound you are replacing.

"With judicious use of the first Transient Designer and the filters, it's possible to fine tune your trigger signal even on really difficult tracks like snares with lots of hi-hat spill."

The trigger section is very comprehensive. You can filter the trigger signal and adjust its overall gain into the system, then by using the two green trigger thresholds you can set different levels for both the transient and the overall level. The sample will only trigger when both are reached.

With judicious use of the first Transient Designer and the filters, it's possible to fine tune your trigger signal even on really difficult tracks like snares with lots of hi-hat spill. The red arrow is a 'rim' threshold. This is set higher than the standard threshold to catch just the loudest peaks which can trigger an optional rim hit snare, with the level adjusted by the rim knob.

SPL provides the Xchanger with three sampled kits which you can access with the buttons above the drum kit graphic. These sound good but to make it as flexible as possible you can build your own sample sets using the editor page. Unfortunately, the Xchanger only likes WAV files so if like us you have thousands of AIFF files you will have some converting to do, which is a pain. Yes, you can batch convert but why no support for other formats?

Having said that, once you've got the WAV files it's very easy to put them in. Each of the eight available dynamic levels can have its own sample and you can even put in an optional rim sample if you like. If you only put in one sample it plays across the whole trigger range, so you don't have to have multisamples for it to work. You then save this as a preset and you can call it up using the load button on the front panel.

Once you have chosen your sample you can process it using more filters and the second transient designer. You can change its pitch and then blend it with the original sound using the dry/wet control, or just use it on its own.

On a good clean input signal it takes very little time to set up. The triggering is rock solid and the phase is remarkably good. You can swap the sample phase and advance or delay its playback, but we didn't need to do any of that in our tests - it just worked. With difficult trigger signals you have to do a lot more fiddling but then that's why SPL has given you so much control. It's possible to get things to trigger that many other systems would give up on.

The addition of the four presets means you can set up your basic trigger, copy it to the other presets and tailor these to any problem moments. With a bit of judicious automation to swap between them, you can tame pretty much any problem track without having to edit the audio. Great as this is, SPL promises MIDI triggering capability very soon with version 1.2, which will be a free upgrade to all existing users.

This is a fantastic plug-in, with incredibly powerful drum replacement features.

Hear what DrumXchanger is capable of:

Bass drum replace with no DrumXchanger

Snare drum replace with no DrumXchanger