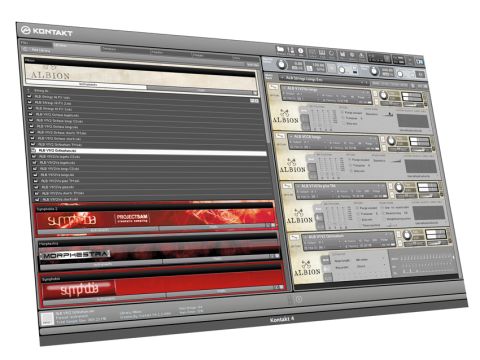 Great-sounding and diverse orchestral samples at a wallet-pleasing price.

With orchestral scores underpinning film and TV soundtracks, as well as the unstoppable growth in computer game music, it's perhaps no surprise that the shelves of orchestral sample collection stockists are bending under the weight of quality options from a number of manufacturers.

It remains true that the very best results come at a price, with full orchestral collections, packed to the hilt with playing variations, invariably costing four-figure sums.

Alongside these 'program-one-note-at-a-time' libraries, collections such as Symphobia have been developed to provide more instant scoring gratification. Combine the two concepts and you've got a winning formula. Make the resulting library available for just a few hundred pounds and it looks better still.

Enter Albion, a British-made orchestral collection which should open orchestral programming up to a wider user-base than ever before.

Albion is a download-only library which requires either the full version of Kontakt, or its bundled Kontakt Player sibling and, once it's passed through your net connection onto your hard drive of choice and been unzipped, will account for 25GB of space.

Starting with Albion, you'll find sounds divided into useful combinations, depending on how quickly you want to generate a grouped orchestral sound. Basic Ensembles cover entire string, wind and brass sections to provide you with common articulations, including legato and staccato but you'll find there are more, section by section, in alternative program patches.

There is a choice of four microphone positions - Close, Tree, Ambient and Outrigger, so creating the depth of space you want is child's play.

There's a wonderfully 'live' feel to the samples - as they've been recorded to two-inch tape - you can hear the space around them breathing, which provides a pleasing alternative to other, more anechoic-ally recorded libraries.

If orchestral percussion flavours are your desire, the Darwin Ensemble won't disappoint. Featuring bombastic, Hollywood-style large drums, these boom, smash and crash their way through your mix.

For more esoteric loops, Brunel contains weird and wonderful percussion taken from assorted sounds such as Bamboo sticks, wine glasses and so on, all of which provide tempo-locked loops.

Among the many other features of note, a favourite is the Ostinatum string programs, which provide an up to 16-step sequencer within the program editor, allowing you to assign velocity and note offsets to create dynamic, repeating phrases. These can be used to play chords or single notes at a time and they sound fabulous.

Albion is wonderful. There's a freshness and spirit about the sound that separates it from many of its competitors and its approach - to combine most-needed single instruments as well as esoteric orchestral effects - is a winner.

What's most pleasing is the quality at this price-point. We genuinely wouldn't have been surprised, if played these samples blind, to discover the library cost three times its list price.

If you've been holding back on an orchestral collection, hold back no longer.