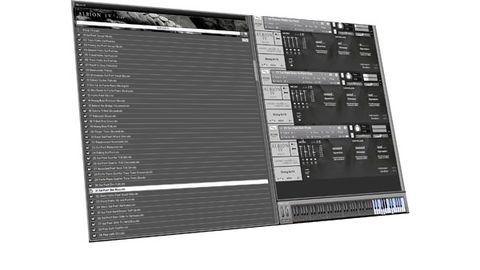 If this is what the future of orchestral sample libraries looks like, you'll get no complaints here.

Drawing on the orchestration approach of collaborator Ben Foskett, this features bends, wide trills, atonal warps, unusual performance styles and much, much more to cater to composers who want to take the path less travelled.

As with other Albion titles, sample content is split into orchestral sections and then High and Low sub-folders, so it's easy to track down the instruments you're looking for.

Then the file structure becomes more involved; you're greeted with a set of Kontakt patches which act as tasters, mapping a number of articulations and performances to a single key.

Once you find what you're looking for, you can then head into the Individual Sounds folder and load that single articulation across the full key range, so that you can play chords for it, or select a single individual pitch.

This isn't a criticism; the sheer range of performance styles and patches is so broad that a single word could never cover a blanket description but the categories do narrow your search somewhat.

Once a patch is loaded, the Spitfire UI takes over, offering a blend of microphone positions and sliders for Dynamics, Releases and Expression which are pre-mapped to MIDI Controllers.

Usefully, when using the preview patches, the name of each articulation pops up as you trigger it from the keyboard, so swapping a preview for its full version is very straightforward.

Uist's instruments are so unexpected, disquieting, unusual and leftfield as to be jaw-dropping. For trailer, soundtrack and game composers in particular, there's an eeriness to what's on offer here that the darker side of your imagination is set on fire by raw possibility from the moment you start auditioning programs.

Particular favourites include the col legno high strings, which gently warp in and out of tune to produce instant horror movie drama. Equally, the clusters of low winds and brass offer a flavour which we've heard in no other library, while the pulsing rhythmic patches which slowly settle into held, sustained notes are a dream for music cues which need to transition between scenes.

There are multiple flavours of Multiphonics too, which are highly welcome. This 'overblown' performance technique which adds additional, frequently atonal extra tones and harmonics can be performed in many forms when you find yourself in front of talented players but is usually covered by a single patch if it's included in an orchestral sample library at all.

Here, 'harsh' and 'soft' alternatives are provided, as well as patches which descend into multiphonic chaos from unsuspecting, calm starts. But it's not all dark matter; the Residual Tones patches in the winds would be as at home underscoring light, pastoral scenes as they would those depicting something more sinister. Have a listen to the audio clips to get a sense of the huge sonic range on offer.

As you might have gathered, Uist is not the library to which you should turn if you're looking for a sample collection to cover core orchestral bases. However, it is a veritable treasure trove for composers who want to expand their sample repertoire with more leftfield orchestral choices and, in that context, it's a glorious addition to the Albion range.

In particular, as a kickstarter for musical ideas, it's an inspiring collection and, at least until you've familiarised yourself with its capabilities, it's a library to turn to early in the writing process, as slotting these sounds in when an arrangement is already fairly fully developed is more difficult.

This library represents a significant step forward in providing tools for composers writing with samples and it'll be interesting to see if other established libraries bring out more experimental sound collections too. In the meantime, Spitfire Audio's reputation as trailblazers in this field is reinforced.