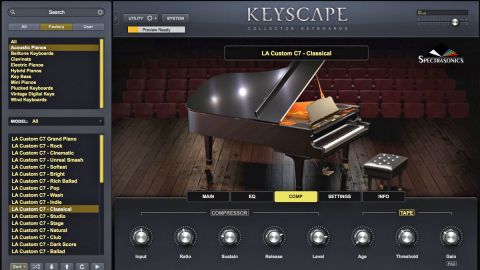 Keyscape puts an incredible array of beautifully emulated keyboard instruments at your fingertips, with high-quality effects to match.

Well, who knew? In parallel with building one of the most powerful synthesisers of all time, Omnisphere 2, Spectrasonics has also filled the last ten years with the creation of a similarly sizeable - if nowhere near as architecturally ambitious - instrument based on "the largest selection of collector keyboards in the world".

That decade wasn't just spent sampling the 36 instruments that are brought together in Keyscape, but also finding and restoring them in the finest detail - multiple times if required - to get them sounding exactly how Spectrasonics Founder and Creative Director Eric Persing and his team wanted them to. For example, vintage hammer felts were used for the C7 grand piano, "manicured" to achieve warmth at the quieter end of the dynamic range and bite at the top.

Keyscape can be bought as a download or on a USB drive, and although the full install weighs in at an impressive 77GB, you can opt for the lighter 30GB version, should you be short on space, or supplementing your main rig install with a 'secondary' laptop one. It's powered by the same STEAM audio and streaming engine as Omnisphere 2.

During the sampling process, Spectrasonics endeavoured to capture all the noise, imperfection and quirks of the original 'boards, as well as the full spread of their tonality. Each instrument has been sampled with up to 32 velocity layers, and uses multiple round robins per layer for 'human' variation between notes. On paper, then, it all looks very promising...

The first thing to understand about Keyscape is that it's nothing like Omnisphere 2 (or even 1) in terms of programmability and depth - that's simply not the idea behind it.

While Omnisphere gives you an expansive range of editable parameters and synthesis engines to delve into, Keyscape is all about the sampled instruments themselves, rather than the comprehensive tweaking of them.

However, Omnisphere 2 owners can actually load Keyscape presets into said synth, bringing its arsenal of sound-shaping and processing weaponry to bear on Keyscape's vintage tones. All that's required to do this is the latest version of Omnisphere 2, which makes Keyscape's presets available in its browser and loads them in as layers, complete with all their controls. That's a very big bonus, for sure.

Keyscape's interface is clean and straightforward: patch browser on the left; big picture of the loaded keyboard in the middle (sadly not mouse-playable); tabbed sound editing, Settings and Info (revealing the history of the current keyboard) section at the bottom; and Utility and System menus at the top.

Loading a preset takes a while with many of the instruments, even from SSD, as you'd expect, given their scale. The text 'Preview ready' appears in the progress bar when the patch is available for basic (ie, without round-robins and the full stack of velocity layers loaded) auditioning onscreen or via an attached keyboard, though, which shortens the thumb-twiddling time a bit.

We could spend three times as many words as we have available for this whole review discussing the actual keyboards at the heart of Keyscape, but here's a quick summary of the highlights - the full line-up can be explored on the Spectrasonics website.

Heading up the Acoustic Pianos category is the LA Custom C7, an 'enhanced' Yamaha C7 that uses "rare long-fiber virgin wool felt" on its hammers. It's joined by a Wing upright piano from 1900 in two configurations: with tacks on the hammers, and with its bizarre ball bearing 'tremolo' pedal option in place.

For us, the best of Keyscape's extraordinary series of classic 'boards is to be found in the Electric Pianos category. The main event is the LA Custom Model E Rhodes, with its glassy early 80s tone, but we actually prefer the 73 MkI and the awesome Wurlitzer 200A. There are also models by Hohner, Yamaha, Vintage Vibe and, er, Weltmeister (that niche enough for ya?).

The rest of Keyscape's main library comprises a cornucopia of acoustic, electric and digital instruments from the last century, including three clavinets, a clavichord, four toy pianos, five more by Rhodes, the Baldwin Solid Body Harpsichord, the Harmochord electric reed organ, the dinky dolceola and many more.

Supplementing the main Presets are a wealth of Duo patches, pairing different keyboards up for all sorts of interesting hybrids, with Mix controls for blending the two. They're fantastic as they are, but like the effects, we'd really like to be able to choose our own pairings as well. You can of course load Keyscape patches into Omnisphere 2 and use its effects instead, but obviously that's only an option for owners of both.

Rather than presenting you with all of its under-the-hood effects and enabling free selection of them in any patch, Keyscape bakes a fixed set of processors and tone-shaping parameters (called Custom Controls) into each preset, giving access only to what Spectrasonics has decided are the most relevant and appropriate rigs for each one.

These processors are housed in the tabbed area at the bottom, which even changes the number and names of the tabs themselves for each patch, but always keeps Main on the left and Settings and Info on the right, with up to two contextual tabs in between. The demarcation between the Main and contextual tabs isn't particularly clear, as they all contain effects of various kinds, but we think Main is meant to be your first port of call for transformative editing and mixing of signals for multi-mic, layered and Duo presets.

Also, ever-present at the right-hand end of the Main tab is the Performance section, which comprises two or three knobs with or without an accompanying switch, depending on the instrument.

Velocity Sensitivity is  always included, and variable sampled Release Noise is available for most of them; but then you might get a Pedal Noise (for instruments with sustain pedals), Release Time, Damping or Attack knob, too, and possibly a switch for toggling velocity-sensitive vibrato (the Clavichord presets), key click (Harmochord presets), monophonic mode (Rhodes Piano Bass) or muting of mechanical noise and DI channels (Electric Harpsichord).

The Settings tab holds Keyscape's note-and voicing-related controls. Up to 64 voices of polyphony can be set, transposition up or down by one or two octaves applied, and up to two octaves of pitchbend specified in either direction.

You can also apply between -24dB and +10dB of Gain, and switch to any of 64 non-western and esoteric scales (African, Arabic, Gamelan, Microtonal, etc); and for those working on less powerful computers (or who want to save resources), the Thinning button cuts down the round-robins and velocity layers to claw back system memory.

Wrapping up the Settings page, the Velocity panel offers a simple interactive graph in which to reshape the global velocity response curve, complete with presets for a small selection of controller keyboards by Akai, Korg, Novation, Roland et al (we're told more presets are due in v1.0.1).

Finally, Keyscape's System page is where  you toggle the audio engine between streaming and memory-cached operation (streaming being the more stable, quicker option), switch round robin triggering between Sequential  (ie, the same order every time) and Random,  set your startup directory in the browser and other miscellanea.

Keyscape's effects are superb. Spectrasonics more than earned its effects modelling stripes with Omnisphere, and every bit of that knowledge and skill has been fully utilised again for Keyscape.

The devices on offer take in the gamut of vintage types, and keep things simple with their intuitive, boiled-down controls. Again, they're instrument- and preset-specific. For example, the LA Custom C7 piano's Compression module features the full complement of controls, as befits its wide dynamic scope and nuances (Input, Ratio, Sustain, Release and Level), and has a decidedly transparent sound; while the JD-800 - Crystal preset only has a two-knob setup (Amount and Gain) but adds in the option to switch to tape-style compression.

The Character module, available to certain acoustic pianos, is essentially a preset-based tone control and a Color Shift knob for harmonic brightening and darkening. For more involved tonal sculpting, the excellent Amplifiers and EQs, single Filter and eight vintage-modelled Distortion algorithms all ably take care of business. Then there are seriously impressive reverbs, a tape echo, luscious modulation effects, a playground of wah-wahs and more.

No doubt about it, Keyscape's effects are on the money in terms of quality and simplicity - we just wish we could swap them out with each other, for experimentation's sake if nothing else.

Keys to the city

As mentioned earlier in the review, Keyscape was always going to live or die by the quality  of its 36 emulated keyboards. Happily - and, given the pedigree of the developers behind them, not even remotely surprisingly - those instruments sound phenomenal, serving up a versatile melange of flavours, from the super clean LA Custom C7, through the funky, evocative electric pianos and clavs, to the pretty Celeste and other Belltones, and the crusty finish and grit of the toy and tacked pianos.

We have a few criticisms, though. First, we're not that fussed about the Vintage Digital Keys section (MKS-20, JD-800 and MK-80), but that's not to say it won't find its fans, of course.

More importantly, we'd love to be able to cook up our own Duo combinations and at least have the option of choosing our own effects, rather than being made to stick with the prescribed rack that comes with each preset or call up Keyscape inside Omnisphere 2.

While we appreciate the selective approach that Spectrasonics has adopted to keep Keyscape fully focused on the particular strengths of every one of its sounds, why shouldn't we be able to push the Dolceola through a phaser if we want to?

Despite those quibbles, Keyscape is almost impossible not to fall in love with. The care, attention to sonic detail and passion that have been poured into it are palpable at every turn, the huge preset library is an absolute pleasure to wander through, and the deep multisampling employed results in a very high level of playability.

As its almost self-conscious ease of use suggests, it's very much a 'player's instrument', and the sizeable sector of its target market who consider themselves keyboardists first and 'producers' second will really appreciate the almost instant nature of its architecture, quite aside from its stunning sound.