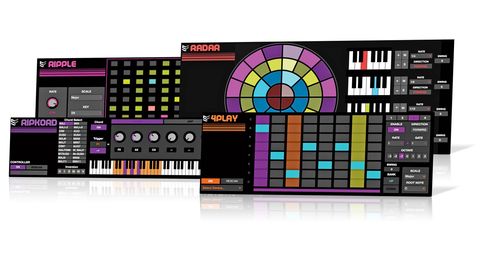 The five sample- based melodic instruments cover plenty of ground, from the vowel morphing of Dirty Talk and floaty textures of Ambn, to the harsh noises of Glitch Thing, and the epic bass and lead tones of Mad FM and Trancebot.

Grid Ninja enables eight parameters from anywhere in Live to be assigned to eight knobs, which snap to zero when released and can be 'played' using Push or a Launchpad's pads; Seq Mod lets you control a single Live parameter using a 64-step sequencer; and XYZed does the same, but using a 4x4 sequencer with an amount knob for each step, and the direction and offset of the X and Y axes being independently adjustable.

The main idea behind Tricky Traps is to use its many devices together (Radar with Syndrum, say, or ISO Arp with Ambn), and, indeed, doing so proves creatively fruitful and fun, with even minimal user input yielding all sorts of wild and unexpected grooves and patterns.

The only annoyance is that forgetting to 'unassign' Push when deleting a MIDI Effect assigned to it results in the pads freezing until a device is assigned in its place.