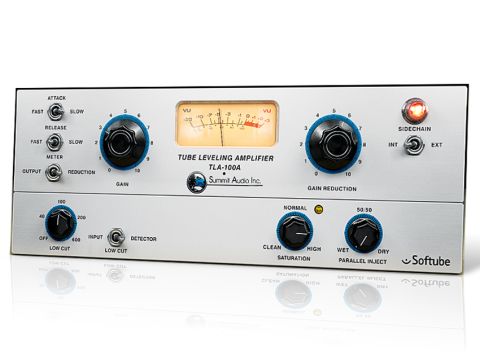 A studio classic, the TLA-100A brings diamond-standard volume levelling and tube saturation to your desktop. Beautiful!

Swedish developer Softube has established itself as a hardware emulating class act with its TubeTech range of compressors and EQs, developed in association with TubeTech themselves.

Now the company has teamed up with Summit Audio to 'virtualise' the classic TLA-100A Tube Levelling Amplifier, and rather than just making a straight-up model of the original, has added a few welcome extra controls. In theory, this should be even better than the real thing!

"Strap the TLA across a vocal and you will immediately hear an increase in presence - it's like listening through a magnifying glass."

The original Summit TLA-100A compressor hardware unit is a go-to dynamics controller for vocals and acoustic instruments, and it can be found in most top-flight studios around the world. The name 'Levelling Amplifier' actually serves as a much more appropriate description than 'compressor', as the idea is that it controls the level of a vocal, say, without you knowing it's doing it.

The TLA's popularity is down to its sublime levelling, smooth operation and unparalleled ease of use - all of which are very much evident in the software version, too. Summit Audio's 'set and forget' slogan is more than just marketing guff: simply set the peak reduction knob to the desired amount of compression and it more or less takes care of itself.

Being a valve-levelling amplifier, the TLA hasa soft-knee response, so the compression gradually increases as the signal exceeds the threshold. By the nature of the valve process, the level control is extremely smooth.

The Attack can be switched between three speeds, although even the nippiest isn't as fast as you'd get from a VCA or solid-state compressor. The Release time also has three speed settings, but is program-dependent as well, so its response depends to some extent on the shape of the incoming signal. An external sidechain input is also onboard, for de-essing or other keying tasks.

The plug-in goes a few steps further than the original box with its extra Modern Section controls. First, the Low Cut filter enables you to temper the bass response to either the internal or external sidechain input - particularly useful for material with a lot of low-end content. Then there's the Saturation control, which gives the famous saturation character and colour of the hardware without the need to overdrive the input.

Finally, although perhaps not so useful on a compressor of such gentle nature, the Parallel Inject control enables you to set the wet/dry mix of compressed and uncompressed signals.

The same but different

If you're familiar with the hardware TLA-100A, you will instantly feel at home with the plug-in version. Strap it across a vocal and you will immediately hear an increase in presence - it's like listening through a magnifying glass.

It's not quite as astounding as the hardware, but that familiar full and open sound is definitely there. The saturation element is very subtle, adding a bit of natural glue to vocals.

Acoustic guitar is notoriously hard to compress well, but the TLA-100A handles it nicely, with the Low Cut filter ably sidelining those booming low notes. Similarly, bass guitar benefits from the smooth and easy operation to give a warm fat sound, and again the filter helps to ensure that you don't lose any weight in louder sections.

In summary, this is more than just an excellent emulation of the TLA-100A hardware. While it's very, very similar in terms of sound quality, the addition of those 'modern' features takes it to new heights, arguably making it better than the original. Good work, Softube!