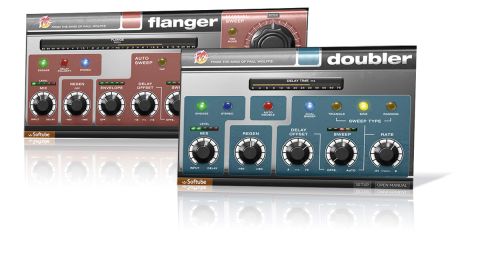 They might seem similar, but Fix Flanger and Doubler make for a brilliant pairing of modulation effects, whether you stick with automatic sweeping or get hands-on.

Both are based on his prototype hardware designs from the 70s, including the Real Time Auto Doubler AD-2. The general idea is to blend the dry input signal with a delayed and modulated version of itself, but each plugin targets a different outcome...

Fix Flanger is the more complex of the two, and its delayed or pre-delayed signal path features both Auto (LFO) and Manual Sweep controls, with the option to blend the two.

The Auto Sweep settings comprise LFO Rate, sweep start point Delay Offset and Sweep (the blend of Auto Sweep and Delay Offset). These are supplemented by a one-knob Envelope follower and two Tap buttons - one setting the LFO rate, the other dividing it by four.

The Manual Sweep section can be switched between regular Offset mode and the tape machine-emulating VSO mode. For both Manual modes, the Servo parameter introduces a degree of inertia or 'bounce' as you change delay settings.

For richer effects, Dual Sweep mode switches to two hard-panned doublers, out of phase with each other; while Auto Double mode disables the manual Regen and delivers what we can best describe as a thicker, more smeared effect.

As with Fix Flanger, the global input/delay Mix sits alongside a Stereo enhancing option, and metering consists of Delay Time, input Level and sweep cycle LEDs.

Fix Flanger and Doubler both sound great, and although they're based on very similar concepts, having them as separate plugins focuses the workflow. A handful of presets provide useful starting points, and hammer home the fact that small parameter changes, particularly in delay timing, can heavily influence the end result.

Fix Flanger's flexibility makes it the more fiddly processor to use, but highlights are the Envelope (particularly good on drums), the switchable delay Polarity, Tap tempo (assists quick setup) and the tape-inspired VCO.

Common to both plugins, we really like the delay metering, which is extremely helpful when finding the flanging pass-through point, and Fix Flanger's Sync indicator is a nice touch, glowing when both source and delayed signal are near to or at their fully synced point.

If we were being picky, tempo sync for the Rate controls would be welcome, but other than that, these are great additions to the Softube range.