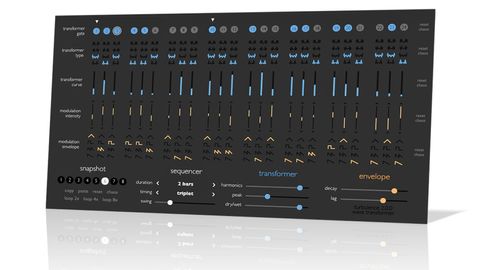 A rare miss from Sinevibes, Turbulence 2 makes for an acceptable distortion effect but a largely ineffective modulated one.

There's an old saying amongst creative types: why get paid once for a job when you can get paid twice? This is why it's not unusual to come across remixers producing almost identical tracks for different artists. Less common, however, is the phenomenon of music software developers producing nearly identical plugins for different effects. Enter Sinevibes Turbulence 2.

Though an update to the original Turbulence in name and function, Turbulence 2 (Audio Units) is, in fact, practically a carbon copy of Sinevibes' recent tour-de-flange, Flow. Where that particular masterpiece was a step-sequenced, modulated flanger, Turbulence delivers distortion instead.

T2 is a sequenced distortion effect with 1-32 steps (24 in triplet mode) at step values from 1/32 to 1/1, with optional Swing. The distortion effect is called the Transformer, which we're informed "bends" and "curls" the input signal in a unique way. Its four modes each have a fairly nice sound, though not as great as the marketing suggests.

As with Flow, each step in Turbulence 2 modulates various parameters of the effect via a collection of per-step controls - in this case, three Transformer (Gate, Type and Curve) and two modulation settings (Intensity and Envelope).

Transformer Gate determines whether or not the effected signal is heard for a given step and can be used to create stuttering patterns; Type presents a choice of four transformer models; while Curve controls the intensity of the effect. Three global controls include input filter cutoff (Harmonics) and resonance (Peak), and a Dry/ Wet mix control.

The Modulation Envelope and Intensity control the shape and depth of modulation for each step. Intensity can be pushed up or down, inverting the waveform at negative values, while Envelope controls the envelope shape, with four fixed ones on offer.

Then there are two global modulation controls: Decay for setting the length of the envelope and Lag for smoothing or sharpening the steps' transitions.

Finally, eight snapshots enable quick swapping between complete T2 setups, and these can be automated, along with the main global controls (but not the per-step ones). Unfortunately, though, we don't reckon either of these will see a great deal of action, as distortion doesn't really lend itself well to automation or this kind of preset hot-swapping.

This, it turns out, proves to be Turbulence 2's achilles heel, because the entire premise of the plugin is fast, rhythmic swapping of distortion settings! Unlike Flow, which could be confidently let loose on any kind of audio, Turbulence 2 only suits a limited range of sound types, and even fewer would benefit from its sequencing.

So soon after Flow, Sinevibes was always going to struggle to make Turbulence 2 equally impressive, but even taking it entirely on its own merits, it's by no means a great effect. If you hanker for the sound of overdriven kicks, a la early 90s hardcore, you won't go far wrong. For most other purposes, though, this one's nothing special, with its sequencing functions simply ill- suited to distortion.