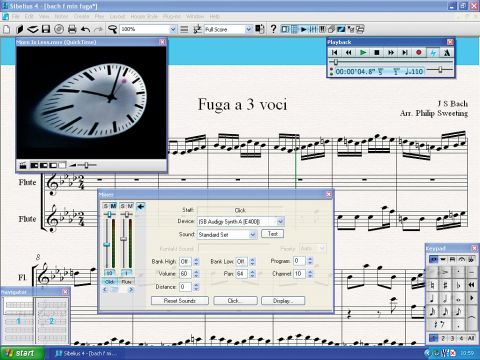 As intuitive and powerful as ever, Sibelius is still the scoring app by which all others are judged.

Sibelius has been around in a variety of forms for about 12 years. After a notable start on the dear old Acorn computer, it hit the PC and Mac in 1998/1999.

It's now available in a number of different flavours to suit different types of user; here, we're looking at the latest update - version 4 - to the flagship software.

For Sibelius, the education market has always been a significant one - the application is endorsed by the majority of the major music academies and colleges in the country.

This new release boasts a number of features that are specifically designed for that audience, more of which we'll detail a bit later on.

Users of Sibelius 3 will find the new version's interface to be very similar to that of its predecessor, although there's been a certain amount of the apparently obligatory re-styling.

There are a few extra buttons and some additions to the existing floating palettes. These have retained their translucency, which was added in the last version but will be new for anyone who's coming from version 2 or below.

All the familiar methods of inputting notes remain. These include: positioning them individually by clicking on the score (very slow); using the nifty keypad interface to specify the notes on the computer keyboard or a MIDI controller and enter them in step time (fairly quick); or employing the Flexitime system to play music in real time via an appropriate controller keyboard or other MIDI device.

This last method is potentially the quickest, but does require accurate playing. Although the system is clever and tries to deal with your inaccuracies, good results are not always guaranteed.

For composers and arrangers, Sibelius works beautifully as a 'musical word processor'. Once you've got some notes in, you're likely to use the intuitive copy and paste facilities to duplicate patterns and create sequences and the like.

It's all very easy and the shortcuts will help you to quickly transpose notes or phrases up and down, to re-spell accidentals, and to copy articulation marks or rhythmic patters.

Indeed, there's a shortcut for almost anything you might want to do, and it's in this area that Sibelius scores (ahem) over its rivals.

Naturally, Sibelius 4 features dozens of changes and improvements throughout the program. It'd be impossible to list all of them here, so we'll highlight some of the biggest and most useful.

Anyone interested in multimedia work will be pleased to know that there's now support for video in Sibelius. You can easily attach a video (in any format that's supported by your operating system) to a score (see the boxout for more on this).

Arrangers of music, especially of complicated multi-part scores, will love the new Dynamic Parts feature. In essence, this means that Sibelius always treats a score as a collection of parts, so there's no need for separate part extraction.

It's possible to switch the view between the full score and individual parts in real time and any updates made to either one will be effective in both. If you prefer, it's also possible to make changes that affect only the part or the score.

What's more, you can now make stylistic (layout) changes to one part and apply these to other instruments. So, for example, you could manually perfect your violin part and then copy its layout onto the other string parts.

If you're a music teacher, you'll find the new Worksheet Creator to be a real help. Sibelius 4 comes with 1700 ready-made worksheets, exercises and resources. These can be easily modified to suit your specific requirements.

Alternatively, you could use the tools to create your own from scratch and also create answer sheets to speed up the marking process.

The internet is fully utilised here, enabling you to publish your worksheets so that students can fill them in or download them. The Sibelius user community can also share their resources online at the SibeliusEducation.com site.

One of our favourite interface improvements is the addition of some extra information and functionality in the Playback window.

Previously, selecting the start point for playback required you to select the appropriate bar, which could be quite difficult and fiddly in a large score.

Now the Playback window includes a slider that marks the current position within the score, so it's easy to slide this to the appropriate point and press play.

A detailed display provides timing, bar, tempo and beat indicators (this also ties in with the video features).

We're pleased to see a proper paper manual included with Sibelius 4. Its information is also provided in electronic form and there are 19 tutorial videos that cover most of the major features of the software.

If you're a user of Sibelius 2 or lower, then it's probably time for an upgrade if your system will take it. There are so many useful additions in the most recent versions - including the Kontakt Player Silver synth - that it's well worth taking the plunge.

If you're using version 3 and you're not a teacher - and you don't really need the video or Dynamic Parts features - then it may not be worth doing.

However, if you're just a 'latest thing junkie', you can buy Sibelius 4 with our blessing. It's still the best scoring application there is and you won't be disappointed.