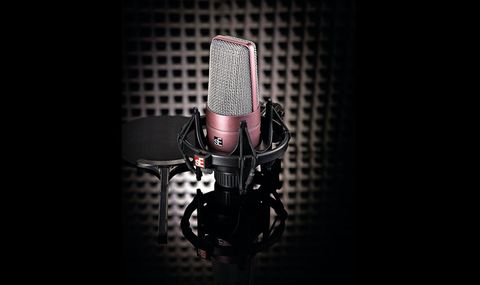 A solid workhorse mic that gets decent results on a variety of sound sources at an amazing price.

A large diaphragm condenser mic is pretty much an essential item for any home studio, not just for recording vocals, but also for a myriad of other tasks that would benefit from a microphone that can properly translate high end detail.

While there are any amount of mics available for three and four figure sums, there are very few for those recordists on a really tight budget. sE Electronics aims to alleviate that situation with its Magneto, which is at a price point more in line with a hand-held dynamic mic.

The company says that the Magneto has been designed from the ground up to produce outstanding results at the lowest price point it's ever set and to bring the heritage of their studio mics to those on a budget. At £79, it's definitely affordable and it's going up against the likes of Audio-Technica's AT2020 and AKG's Perception series.

The Magneto features a back-electret design, and to keep prices competitive, sE has equipped it with a capsule that has not been designed in-house but bought in. sE explains that this is what all mic brands who produce at this price do, but unlike their main competitors, the Magneto is hand-tuned and quality-controlled in-house for a consistent and controllable sound.

Plus the Magneto certainly seems robustly put together, something bourne out by sE's promise to replace it if it breaks within three years.

Finished in a black/gunmetal or limited edition purple colour combinations with white legending and a red sE logo, the Magneto looks smart. There's no pad switch or high pass filter so it's just a case of plugging in, applying phantom power and getting on with recording through its fixed cardioid pattern. The lack of a pad shouldn't be a problem as the mic is quoted as being able to handle SPLs up to 140dB.

On a vocal the mic supplied plenty of detail with quite a neutral character, airy top end being present but not over-emphasised, lower end warmth not quite as prominent as in some more expensive models.

It was here that the optional Isolation Pack came into its own. The mic ships with just a standard mic clip but, as an optional accessory, the Isolation Pack offers a very practical shock mount and pop shield combination for just £39.

While an elasticated cradle mount is always an asset to help stop any vibrations or knocks being transmitted to the mic, it's the pop shield that's essential for vocals and, although this one is a single mesh metal shield as opposed to a more sophisticated multi-layer nylon affair, it is a no-brainer to easily fit it into its slot on the cradle and really does help to kill those plosives.

On a couple of different acoustic guitars the mic provided very usable results with a good overall sound balance. We also tried it as the hi-hat mic on a fully-miced drum kit and were impressed with the amount of high-end sizzle it was able to capture.

If you're looking for a mic to do all those condenser tasks but are on a tight budget, the Magneto offers good value for money.