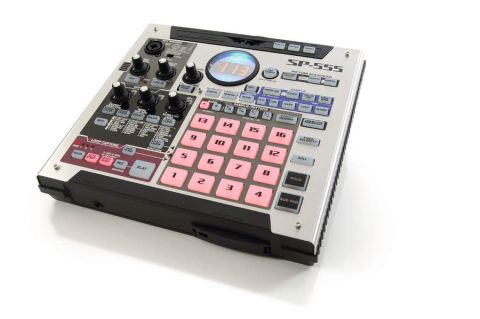 A cool little box of sampling tricks, but it's a shame that it can't sample and sequence on the fly.

The name of Roland's new SP-555 sampler suggests it sits somewhere between the quick and dirty SP-404 and the workstation SP-606. In fact, it borrows features from both models while adding the new Loop Capture feature to the set.

On paper it seems like an ideal upgrade for SP-404 users who have mastered their machine and are now looking for that extra bit of power and control.

The SP-555 is visually similar to the SP-404, with illuminated pads, and a host of dials for real-time control. It can sample from a number of different sources. There's the stereo line input, EXT source, which covers mics (dynamic and phantom powered), and Hi-Z for guitars and so on.

There's also a convenient mic built into the top panel, right next to the mic level dial - although this does require vocalists to practically kiss the panel to get a decent vocal level. It can also re-sample from the pads, which means that phrases, patterns and samples with effects added can be captured and also mixed in with the external inputs for a more flexible set of recording options.

There are two recording modes (both mono or stereo), normal full frequency and lo-fi, which sounds half as good unless you happen to like that 8-bit sound and its inherent dirty, crunchy noise (in which case it's twice as good, since it doubles the amount of recording time). 11 minutes mono recording comes as standard and this is expandable to 12h52m with a 2GB compact flash card.

Several recording options are available including manual, tempo (for a specific length) and auto, whereby a volume threshold triggers recording. In practice, the SP-555 never quite captures the first few hairs of the recording, which can leave some attack portions of kick drums a bit blunt. It's a shame there isn't some kind of pre-recording buffer to prevent this.

There's nothing noticeably coloured or deteriorated about the sampling quality, unless you accidentally choose lo-fi. The compact flash card can also be used to import and export samples. The SP-555 has its own propriety recording format so files need to be dropped on to the flashcard, and then imported into the machine. One little niggle is that files must be WAV or AIF (and not AIFF - that extra F causes a lot of problems.)

Sample editing and pattern sequencing are both on the basic tip. Editing is limited to changing the start and end points by ear, and sequencing is all done live with the option to quantise - either straight or with varying degrees of shuffle.

Straight-up sampling is all well and good, but mashing sounds up with effects is where it really gets interesting. The SP-555 has 37 different effects at your disposal, 32 of these are categorized as MFX and selected via the sample pads, while the remaining five have dedicated pads under the three Ctrl knobs for quick access.

Despite the amount of effects, you can only use one at a time. As a compromise, though, you can re-sample the effected sound back in again. Also, an effect can be assigned to any number of pads. That said, we came across some weird behaviour when assigning more than one pad to an effect such as Step filter. Usually it locks to the BPM and re-triggers from the start of its step pattern for rock-solid rhythm effects. But when two or more pads share this effect only the first one locks, and the others trigger freely from any point onwards so the rhythmic aspect is lost and sounds sloppy.

For live, we'd imagine using the DJFX looper and the BPM looper for twisting, glitching and stuttering-up beats would be great. The voice transformer is a classic and has bags of quality, while the step ring mod is a killer when teamed with the D Beam synth. So weighing it all up, the only other thing we can think of would be to add a mastering-style effect to the output including a limiter and EQ to give the whole mix a bit of polish and consistency. Its not just performers, but soundmen too who appreciate the idea of a signal level that won't overload past a certain point.

Since it's a Roland product, sooner or later it's going to be D Beam time again. For the uninitiated, the D Beam is a light sensor with a range of around eight inches. Pass your hand through the zone to control your sound with a magical gesture instead of the more mundane way of using knobs and keyboards.

There are three quick tricks to play with. There's a basic monosynth, a multi-mode filter and sample triggering. The filter affects the whole mix, and the four filter types are selected through the 16 pads, one column per filter type, with stronger resonance at the top, and milder at the bottom.

The beam is mapped to the cutoff frequency. Karate chopping across the beam produces some cool, stuttering, LFO-style results and pulling your hand out of range opens the filter back out again. The Trigger setting is different because it's mapped on to one sample pad only. Cover the beam to start playback and move off the line to stop - simple. The gate is quick enough to be used accurately, and can be even sharper when using a single finger. What would really make things interesting though would be allowing you to trigger more than one sample simultaneously.

Roland have kitted the SP-555 out with a USB port, which doubles its value as a stereo soundcard and MIDI port. Drivers are supplied, and it also comes with Mac/PC wave converter, software and Cakewalk Sonar LE (for PC only). The SP-555 definitely ups the ante on the SP-404 and provides more power, control, and is just as much fun.

The SP-555's main flaw is its lack of flow. In the live setting the last thing you want is for the music to stop just so you can record a new sample and slot it into a pattern. Sampling and looping needs to be on the fly and on the go, and Roland would be on to a winner if they could make it happen with this.