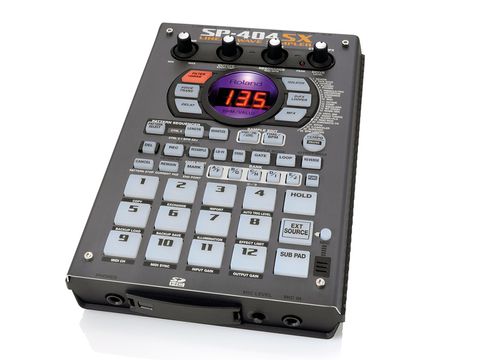 The SP-404 was launched in 2005 and quickly gained fans for its no-nonsense, portable approach to sampling. However, there were also many users and potential buyers that found the SP-404 frustrating to use for a wide range of different reasons.

There was much for such users to grumble about: patterns couldn't be copied easily without a computer and card reader; only one effect could be used at a time; the display was small and cryptic; editing samples was hit-and-miss; and phono jacks were used instead of jacks. And there were a couple of fundamental sticking points, too - the pads weren't velocity-sensitive, nor could samples be mapped easily across an entire octave (as on an MPC).

With all this in mind, people are hoping for something much improved with a new 404. So does the SX impress and do what's hoped of it?

Sampling is pretty straightforward on the 404SX. Plug in your source (mic, line or the internal mic) hit Rec, select the pad you want to sample onto, hit Rec again and sample away. Then hit Rec to stop.

The sample can be marked and truncated (this is still a bit hit-and-miss without a waveform display), and sampling can be done in mono, stereo or the lo-fi mode. Resampling with FX is possible, too.

Sequencing patterns is relatively simple. Hit the Pattern Select button, then record, select the bank you wish to record to and press the pad you want the pattern assigned to, press the Length button and use controller dial 3 to select the number of measures from 1 to 99. You can also quantise and there's a new swing function, too.

Pattern building involves layering single or multiple samples to form a beat. Patterns can be triggered from one pad, enabling songs to be put together by triggering patterns in sequence from their respective pads and the next pattern can be cued while the current one plays. However, there's no dedicated song mode for chaining patterns.

Apart from the obvious aesthetic change from a silver to a grey case, and a new colour-changing display (this glows various colours to represent your input level), you'd be hard pushed to find too many other noticeable alterations.

One immediate downside to the new colour is that it makes it difficult in low light to read the labelling of the sockets on the front of the 404SX (the headphone, mic level and mic-in jacks) and also a few of the other function labels, too.

New features include a Function button for accessing utility functions via the pads - press and hold the Function button and hit the pad to adjust in and out gain, save and load, select MIDI channels, copy and exchange sounds/patterns, import WAVs and AIFFs, auto-trigger sampling and more.

Other changes include the Pitch button, which was next to the display on the old 404, but has been replaced by a formant-shaping Voice Transform function for warping voices and other material on the 404SX. Additionally, the Vinyl Sim button of the old 404 has now been replaced by a DJFX looper that enables DJ-style pitching, looping and stuttering to simulate vinyl or CD deck functionality (this works great and is a lot of fun).

The old effects are still there, but have been moved to the MFX menu. Included main effects (which now switch smoothly) are a low-pass filter with overdrive, a delay and an isolator that removes frequency content to isolate sounds in a loop.

Other major changes involve the use of an SD card rather than Compact Flash, increasing the number of patterns the SX can hold on a card. Depending on the size of card used, sampling time can be up to 48 hours in stereo and 96 hours in mono!

There's also a handy software wave converter app included with the hardware that enables you to import WAV/AIFF files from your computer and save them onto an SD card formatted for the SP-404SX. This means the 404SX is also a great bet for playing long samples live.

In addition, it appears that the sampling/sound quality has been improved. While AIFFs and WAVs could be imported on the old 404, it previously used its own type of sample format with compression to keep file sizes down. The 404SX uses AIFF and WAV as its standard formats and the overall sound quality seems improved. What you put in comes out fully intact (unless of course you want to use the lo-fi mode) and will impress even the most discerning of ears.

So what hasn't been improved? There are still major deficiencies that even a basic sampler should have as standard these days. Save for the fact that patterns/samples can now be copied to other locations without resorting to copying them to the memory card, putting that card in a card reader connected via USB to your computer, copying the pattern in the computer and then sending it back (yes, it really was that tricky), all our other frustrations with the original 404 remain.

This is very disappointing, not only for current users who may have been considering an upgrade, but also for prospective buyers who would have bought the latest model if these issues had been addressed.

The display is still pretty cryptic and the interface is still unnecessarily confusing (no dedicated transport buttons for a start) for such a basic sampler. Also, it's still not possible to sample while playing a pattern (which is a godsend for live sets), there's no roll function, no MIDI Out, no USB and the sequencer is only one track.

We were hoping for a wholesale overhaul to make the 404 easier to use, but that hasn't happened. Its nearest competitor, the Akai MPC500, has all of these missing functions and isn't significantly more expensive either.

To sum up, the 404SX has some subtle improvements and the new effects/sound engine is great, but it feels like Roland has missed a golden opportunity to really make a slimmed down MV-8000 and give this end of the market shake-up.

Instead, while the 404SX is certainly a useful little sampler (and it's capable of decent results once you get to know it), it still has rather too many frustrations. True, it's fairly cheap, and four years ago it might have been hot, but currently the competition offers a lot more functionality and better interfaces for not much more outlay.