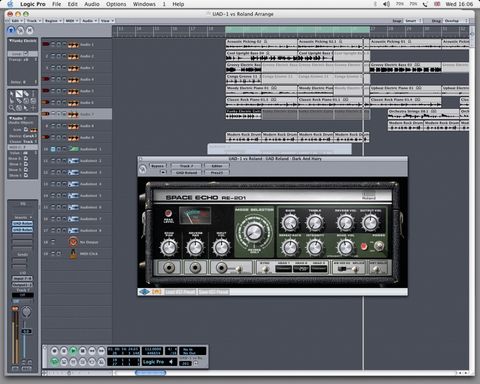 Possibly the most fun plug-in ever. Hats off to the white-coated geniuses in the UA labs!

Arguably, no UAD-1 plug-in was as hotly anticipated as Universal Audio's software implementation of the venerable Roland RE-201 Space Echo.

It's an analogue echo device employing multiple tape heads and a spring reverb tank to achieve its fat, warm sound, so it's no surprise that it took over a year for UA to perfect its idiosyncratic and sometimes chaotic nature.

As soon as you see the UAD-1 Space Echo, you immediately want to start using it - it looks fabulous, the spitting image of its 1973 hardware forefather. Fans of the original range from contemporaries like David Bowie and Pink Floyd, right up to Radiohead and the Yeah Yeah Yeahs, via countless dub reggae albums.

All will doubtless be relieved to hear that the famous tape distortion, wow and flutter, pitch shifting, warmth and self-oscillation has been perfectly captured - it's all there if you want it.

At first glance it looks complicated - all that knob-laden Yin to the Dimension D's minimalist Yang - but the Space Echo's interface is sensibly laid out. On the left side is the Peak Level indicator and VU meter, plus the Reverb Pan, Echo Pan and Input Volume controls. The latter determines the level of distortion introduced - this is nice tape saturation, of course, not horrible digital clipping.

Below the Volume is the Echo/Normal trigger switch. In the centre is the Mode Selector dial with 12 settings divided amongst Repeat (four options), Reverb Echo (seven) and Reverb Only (one) functions: the different modes use different tape playback heads.

Below this is the Temp Sync switch to lock the echoes to your track and to the right of this switch are the Head 1, 2 and 3 settings, which display either as milliseconds or BPM depending on the Sync setting.

On the right of the interface are the Bass and Treble controls for the low and high-frequency response in the tape echo portion of the signal, with Reverb Volume and Output Volume alongside.

Below are the insanity-inducing Repeat Rate (to manipulate the speed of the tape capstan motor), Intensity and Echo Volume dials. Below these are the Tape Age slider, Splice switch and Wet Solo switch. Oh yes, there's a lot you can do with a Space Echo.

After playing with this plug-in, testing the presets and running all kinds of material through it, it's easy to see why there's still so much love for a 30-year-old product - the Space Echo is superb.

You can treat it like an instrument in the mix, rolling the Repeat Rate and Intensity dials up and down, flicking the Splice switch, panning the Echo and cranking up the authentic spring reverb to create some dazzling, out-there sounds.

You can also use it as a more subtle echo or reverb effect to add a flash of brilliance to a recording - but most of us will make like King Tubby and head straight for the madness.

The self-oscillation is wonderful (it can even self-oscillate from silence) and the overall sound is warm and true. Emulating analogue tape is the ultimate test, but UA's algorithms sound spot-on to us.

If Logic's Tape Delay (or equivalent) is a favourite of yours, the Space Echo will blow your mind. It will also blow your UAD-1's CPU meter if you drop more than three on to a track, so sit a couple on auxiliary busses and dial in as much Space Echo as you need from each track's Send knob.

Individually, it's more expensive than the other Roland plug-ins, but as part of the Classic Series FX bundle the price is more reasonable. It's an incredibly versatile plug-in that responds differently according to the source material used, whether single or multiple tape heads are in use, the 'age' of the tape running through it and the settings of the various controls.

It's a fantastic product, both as a static bus effect and as a creative instrument during mixdown. Its inclusion in the FX bundle with the favourable pricing should also help UA shift a few more of the included CE-1s and Dimension Ds as a result.