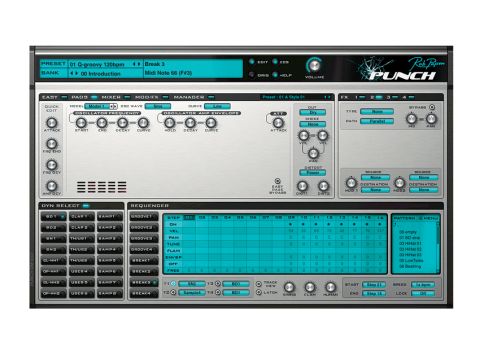 Another winner from the Papen stable, Punch sounds awesome and is fair bursting with powerful features.

Rob Papen has been building a loyal following for many years now. Since his first acclaimed synth releases, he's offered up some nifty effects, one of the best bass synths around, and even a strange but cool rhythm guitar generator. But, until now, no drums.

The idea behind Punch is simple and familiar: take some synthesisers optimised for percussion, throw in sample playback capabilities and some well crafted envelope and modulation options, add effects and a sequencer, and garnish with a multiple-output version.

Punch ticks all of these modern percussive boxes, but above all, drum machines need to sound good. And it does.

After about an hour of preset surfing, it's clear that a huge amount of time has gone into making sure the drums - whether synthesised or sample-based - sound crisp, punchy and lush.

They all slice through the mix beautifully and have bags of presence and space, the latter thanks in part to some great effects. If anything, you might need to rein them in a little, but we'd rather have sounds that are more than ready to go straight into a track than sounds that need five minutes of polishing first.

Variety-wise, there are loads of options. Punch is no Battery but the library should keep you very happy until the free updates (which have already started arriving) are released.

What about the ergonomics? Punch is based on a fairly simple interface. At the bottom lie the drum pads and sequencer section. Each pad has two buttons: a large one for auditioning sounds and a small one to select the drum module editor. It's a good setup, but the selector is a little hard to see on some screens.

When selected, each drum offers a variety of editors, the first section being for sound synthesis. You select your drum type, then choose from a variety of synthesis flavours for each (the number varies for each type, but all are generously stocked); alternatively, you can select a sample from the 250 or so included, or your own collection.

After that come a variety of tailored envelope, filtering and modulation controls before the addition of up to four effects modules (from a very impressive and long list).

Finally, you arrive at the Punch mixer. Each module is accessed via a tab and all are nicely laid out, particularly the global Easy window, which offers up selected tweakable highlights.

The Easy window is a bit of a masterstroke, enabling the simultaneous tweaking of all of the drums (you can bypass control of any you want to exclude), including parameters like decay and pitch.

One of the other great things about Punch is that just about every bit of it comes with a massive selection of presets and sub-presets to get you going quickly. Whether you're looking for drum settings or sequencer patterns, or you just want to surf complete setups, there are presets to suit; and as you'd expect, you can separate these into banks and add favourites.

So at every level of depth there's a handy option to help you speed through the creative process. How much experimentation and routing you get into will depend on you and the way you work, but it's worth remembering that a huge part of Punch's great sound is down to the power of these options. If you don't try these out on your own samples, you aren't making the most of it.

Creatively out of step

Step-sequencers seem to be all the rage these days, so it's no surprise to find one nestling in the bottom right corner of Punch's GUI. However, this particular sequencer isn't your bog-standard, run-of-the-mill effort.

Punch's sequencer revolves around eight triggerable patterns. Each pattern can feature up to four different drum tracks, all of which can be programmed independently, with plenty of editing and expression options per step. You can also edit all four at once.

These patterns can then be laid out in series or stacked up on top of each other, ultimately delivering up to 32 tracks of sequencing. Impressive.

Whether the four-tracks-into-eight system came about as the result of a brainstorming session, public consultation or an inspired dream, it really does work.

Four drums are just enough to get a nice little rhythm going, and the option to layer up to eight of these patterns on top of each other is enough to jam quite nicely, making sequencing patterns very simple and a lot of fun.

It's a much more creatively conducive and flexible approach than the standard method of triggering one pattern at a time from the arse-end of your MIDI keyboard.

There are too many things we like about Punch to list them all, but some additional highlights we haven't mentioned yet are the preset navigation buttons (using the arrow keys - although this can be disabled if necessary), simple right-clicking to open MIDI assignment options, and no less than 19 different types of distortion effect. Grrr!

Punch isn't perfect, though. A nicer drag-and-drop approach to sample-loading would be useful, while the interface colour scheme and fonts could be a little clearer in places. (Rob Papen says that an update released by the time you read this will fix these issues).

But these are pretty minor criticisms when placed against the fantastic features, presets and sound quality.

Punch adds a new twist to the sequencing paradigm, offers a huge range of excellent sounds, delivers some genuine innovations and is very versatile. The virtual drum machine market is already busy, and will only become more so, but we think Punch does more than enough to merit close attention.

Now listen to our audio demos to hear Punch in action: