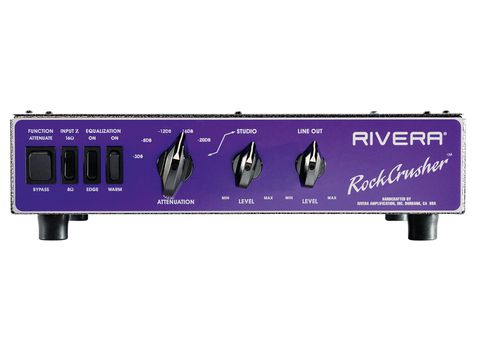 Expensive, but if you want the very best, this is probably it.

Many valve guitar amps sound best turned up beyond what would be an acceptable volume for home use, so you'd think that practically every guitarist would have an attenuator in their gigbag.

However, not all amplifiers are created equal and the same thing applies to attenuators, meaning that they've had to contend with more than their fair share of bad press in the past.

Problems with bad tone and overheating or burned-out output transformers can often be put down to poor design and manufacturing, either in the amplifier, attenuator or both. It's also worth remembering that even though you might be hearing the amp at whisper quiet levels; the output valves can get pushed very hard, leading to a reduced life expectancy.

This goes for any attenuator, so if you're thinking of using one, it pays to keep a spare set of valves for emergencies, as most modern valves don't have the reliability and longevity of their '50s ancestors. You can't always improve the amp to take into account the extra stress of being run flat out for extended periods of time, so it makes sense that you should be looking to buy the best-made attenuator you can afford.

Excellent build quality is the primary claim of Rivera's new RockCrusher, which made its debut at this year's winter NAMM show.

As you might expect from a product with the Rivera badge on it, the RockCrusher isn't the cheapest attenuator out there, but in the professional environment, tone and reliability are what count, closely followed by features and price. Does it cut the mustard? Let's take a closer look.

The RockCrusher is built into a solid but not overly bulky steel chassis, with heavily perforated top and bottom plates and four quite tall rubber feet to aid ventilation and efficient heat dissipation.

It looks the part, covered in an attractive two-tone spattered enamel coating, with a violet faceplate on the front control panel.

The main attenuation switch has six step settings at -3, -8, -12, -16 and -20dB, with a final setting called Studio routing the audio to a wire-wound pot that allows continuous reduction in volume all the way down to zero.

The other front panel rotary control governs the RockCrusher's line out level, which operates independently to the speaker signal. Four rocker switches on the front panel operate a bypass function, high and low EQ emphasis and an impedance changer, allowing connection to 8- or 16-ohm loads.

On the rear panel a pair of speaker jacks, with balanced XLR and unbalanced jack connections for the RockCrusher's line out, complete the picture.

Given the company's focus, it's no surprise to learn that the RockCrusher is very well built. Paul Rivera Sr explains, "The chassis is built of 16-gauge steel. All the components - such as the Japanese-made attenuation selector switch (normally used to switch high current inductive loads such as motors and coils), and the other switches made in Germany by Marquardt, as well as the metal barrel jack sockets - are selected to endure years and years of use.

"The inductive-reactive network uses high-voltage Japanese film capacitors and a special inductor wound exclusively for us, along with military-grade wire-wound resistors housed in aluminium heatsinks.

"Most of the wiring is Teflon-insulated with silver-plated conductors. It's hand-wired here at our factory in Burbank. Three of our employees are responsible for the construction of the RockCrusher, and they've all been with us since 1989.

"Every single RockCrusher is tested using one of our 120-watt Knucklehead Reverb amps running wide open, as well as on our Audio Precision-equipped test bench."

We tried out the RockCrusher with an old but reliable 100-watt Marshall Super Lead head, turned roughly three quarters up.

Despite the temptation to nail everything on 11, many amps actually don't sound good used like this, often deteriorating into a flabby mush of distorted bass, so it's best to increase levels gradually until you find the sweet spot.

The main stepper switch operates with a satisfyingly loud mechanical clunk and, in conjunction with the studio control, it's easy to reduce output down to an ideal practice level.

At low volume levels, the ear doesn't pick out high and low frequencies as effectively, so being able to emphasise them selectively using the edge and warm switches is a great help in restoring the tone.

Right down to practically zero, the RockCrusher excels at maintaining the amp's bouncy dynamic response and doesn't appear to be having any effect on loudspeaker damping, making the amp just as rewarding to use at tea and biscuit levels as it is at full blast with the bypass engaged.

We're guessing this is because, unlike many attenuators on the market, the RockCrusher doesn't present a simple resistive load to the amp's output transformer but an inductive/ reactive one, justlike a loudspeaker in fact.

The line out signal is clean and strong, ideal for direct connection to a desk. However, there's no speaker simulation filter, which is possibly going to be the RockCrusher's achilles heel for home studio use.

To dial-in a good speaker emulation takes a decent stereo graphic EQ, which not everyone will own. However, if you do have one, it doesn't take long to set up and frees you from using someone else's idea of a loudspeaker tone.

Overall, the RockCrusher has an open and transparent feel; you know it's there but it doesn't have any negative effect on the tone.

Aimed at the very top of the market, the RockCrusher is built like a tank with high-end components. That's vitally important, as a failure at this end of your signal chain can result in a blown output transformer or worse - not something you'd want to happen to a priceless and irreplaceable vintage amp.

With the ability to function as a load box and supply balanced and unbalanced line out signals, the RockCrusher does a lot more than most of its competitors, especially when you factor in the dual impedance capability - you'd actually have to buy two of the Rivera's close rivals to cover the same loads.

Ultimately you're getting what you pay for, and despite the lack of a speaker emulation circuit for the line out, we reckon it's still good value for money. Yes, it's expensive, but for professional use, where tone and reliability are paramount, the RockCrusher is a superb performer.