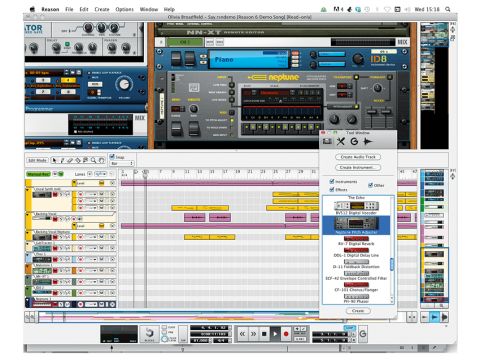 Reason has always been a great track-starter, and now it's a terrific track-finisher too. Full props to Propellerhead!

Depending on who you ask, Reason is the ultimate music production workstation, an inspiring plaything or an important element of an integrated multi-DAW production approach. We'd argue that all three viewpoints are valid.

If you've not used it before, Reason began life as a software recreation of a studio setup that any '90s dance music producer would recognise, comprising a rack of virtual gear - synths, drum machines and samplers - a sequencer, and a novel virtual patch cable system to hook it all up.

Reason was once aimed firmly at electronic music production, even eschewing audio tracks, making it more of a 'software studio' than a true DAW, which left a hole in Propellerhead's product line for such a product - this they filled with 2009's Record, which worked standalone or in conjunction with Reason.

The big news is that Reason 6 has assimilated everything from Record, and added some new extras. Record itself is discontinued. Propellerhead have also introduced Reason Essentials (a slimmed-down edition), and a dedicated audio interface named Balance, which we'll be soon.

So what are the highlights of Record that Reason 6 users can look forward to? Audio tracks are surely the headline addition here - there's no need for us to describe them in detail except to say that they're here, they work as you'd expect, and we're damned happy about it.

Propellerhead haven't just tossed Record into the mix, though - they've added lots of all-new stuff, too, starting with per-clip pitchshifting of audio. It works best on vocals, and while not 100% natural at the full shift of an octave, the results are eminently useable for pitching both up and down - it sounds processed, but in a very cool way.

The range is limited compared to, say, Ableton Live, but it seems that the idea was to present an algorithm that gives good results across its entire range. If you're really desperate for extreme transpositions, you could just render the shifted audio and then shift it again.

There's now a handy extra-large heads-up display (complete with tuner) for keeping track of recording levels from across the room. And on the technical front, there's finally 64-bit support, which will be a big deal for some users.

When Record was announced, we were initially sceptical about the claims as to the realism and authenticity of their SSL-modelled desk. However, authentic is precisely what it turned out to be.

The eight busses; the per-channel gating, compression and EQ; the sidechain for the compressors (including that master output) - it's all there. And then there's that famous bus compressor.

Now, this is not quite the all-purpose mix panacea that some people make it out to be, but when you want that specific radio pop sound, it's a fantastic recreation that can easily get you there.

As well as being a great tool for quickly shaping mixes, the mixer imbues warmth and cohesion - we even know of a few producers who have used it as their final mix tool on stems from another DAW.

As far as the interface goes, its appearance is pleasingly chunky and the control ranges well calibrated.

One thing to be aware of is that Reason still only runs as a ReWire slave, so you can't route tracks from, say, Cubase or Logic directly into Reason's mixer using ReWire - you'll have to bounce down to WAV and import.

For us, though, it's all about the new devices: The Echo, Pulveriser and Alligator. The Echo is a Roland Space Echo-esque delay with filtering, distortion/limiting, pitch modulation and "smearing" of repeats via a Diffusion control.

There are Trigger and Roll modes, too; Trigger uses a switch to momentarily open a gate on the input signal, while Roll has a slider that, when increased, causes the input signal to be 'frozen' by the delay.

A ducking mode uses the input to drop the delays in level, enabling you to add masses of delay without it swamping the dry signal - brilliant for vocals. And there's one more clever touch: a breakout section for the delay signal lets you run it through other devices before feeding back to the delay line's input. The creative potential of all of this is simply huge.

It sounds terrific and can more than hold its own against top-end plug-ins when it comes to adding grunge, age, warmth and character. The obvious use for Pulveriser is on drums, and this is aided by the wet/dry knob, which dials in parallel compression.

It's not just for drums, though - we found Pulveriser to be particularly sweet on all kinds of (so-called) real instruments.

Alligator splits the signal into three frequency bands, with each gated by MIDI, CV, manually (by using the Manual buttons) or preset patterns (many of which work independently on each of the three bands).

Each band has its own amp/filter envelope and filter LFO amounts, with band-specific overdrive, phasing and delay effects. The dry signal can duck the processed one, too, like The Echo. We'd love to see this added to Reason's existing delays and reverbs.

In all, all three new devices are fantastic, with a huge range of creative applications. One issue is limited file format support: just AIFF or WAV. We expected to be able to import standard music distribution formats like MP3 and M4A.

Another gripe is that tools are only accessible via fixed key combos or toolbar icons. We think a pop-up tool menu and/or assignable keys would help, particularly if using multiple DAWs. And power-users of other DAWs may find that Reason 6 lacks certain features they rely on, such as drum replacement, OMF import/export, graphical pitch editing, convolution reverb and surround sound.

None of these grumbles even comes close to curbing our enthusiasm, though. Reason 6 is an outstanding update to an already awesome production platform that continues to be perhaps the most stable and CPU-friendly DAW on the planet (no doubt due to its self-contained nature).

While it's now irrefutably a DAW and not just a 'software studio' for electronic musos, it remains a proudly different beast to more 'traditional' rivals like Cubase, Logic and Pro Tools.

In short, absolutely everybody should try Reason 6, whether they're a complete sceptic or a hardcore Reason devotee. One last thing: if you own Reason and Record, you can 'pay what you want' for the upgrade until the end of October, so act fast!

Now listen to our audio demos to hear the new Reason 6 devices in action:

End of section edit, with Alligator

Outro, with The Echo