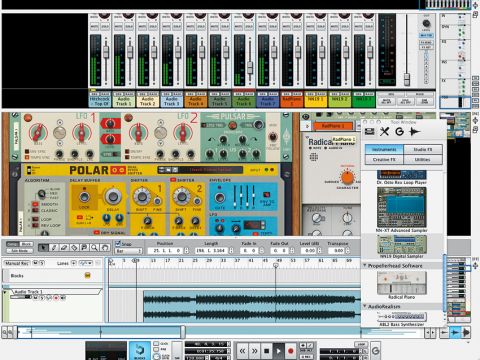 Conceptually controversial, Reason 6.5 is nevertheless a technical masterpiece and a pivotal update.

In December 2000, a piece of software arrived that changed the face of desktop music production.

Reason was keenly priced, CPU-efficient and projects could be shared with ease. It was a hit.

Reason has evolved to include comprehensive mixing and audio playback, but while other DAWs support open plug-in formats such as VST, RTAS and AU, it has always been a closed shop. Enter Reason 6.5 and the game-changing step that is Rack Extensions.

The idea is simple: open Reason's Rack to third-party developers. And that's exactly what Propellerhead has achieved - Rack Extensions have all the base functionality of existing Reason devices.

There are over 20 launch REs, including three from Propellerhead (Pulsar, Radical Piano and Polar) and FXpansion's Etch Red.

There were advantages to being self-contained. Firstly, Reason was the most CPU-efficient and stable DAW by a country mile. Happily, we still haven't had a crash, despite trying everything we could think of to trip it up.

It's not all gravy, though. When using lots of REs, we had occasional unnerving screen freezing, causing the kind of gut-twisting feeling of which Reason users have thus far been blissfully free.

Then there's the fact that some REs introduce latency; for those who have only ever used Reason, this sluggishness will be a new experience. We've also never before had asystem overload when using Reason on our studio machine, but we reached this point after adding as few as 15 REs to large projects.

This means that Reason urgently needs track freezing. You can't expect people to repeatedly bounce and bypass large numbers of Devices in order to finish a project.

Another factor in peril is Reason's previously universal project portability. We believe that any REs you don't have in a shared project should be downloadable as playback-only versions.

As it stands, you get bypassed placeholders - but what if it's a critical Device, like a synth? Considering the number of users out there who collaborate with Reason, we rather think Propellerhead have ridden roughshod over one of its central tenets. The free 30-day trial versions won't help either, as the first thing most 6.5 users will do is try out the lot, and trials can only be activated once.

The end of the beginning?

Despite our criticisms, we're hugely impressed by the way Propellerhead has implemented Rack Extensions. With the exception of the collaboration issue and immature RE pricing, any issues are the price of progress (we should remember that Propellerhead has always cited these as the main reasons for notopening its software up previously).

Only time will tell whether Rack Extensions represent a step too far, damaging Reason's unique appeal and offending the software's loyal fans. For now, though, it looks like Propellerhead is getting the balance just about right.