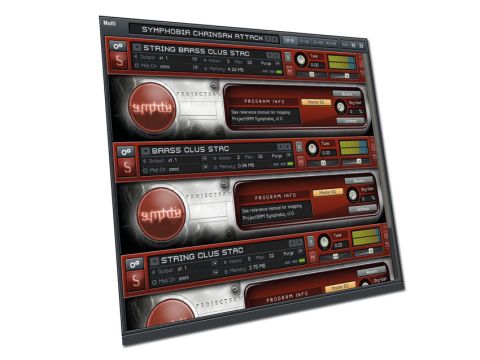 Symphobia makes it easy to make the cinematic orchestral music you want - fast.

The brains behind Symphobia are soundtrack and games composers themselves, so they know exactly what's missing from the current crop of software orchestral titles.

Namely, multi-instrument combinations and orchestral effects which are ready to burst forth to accompany all manner of cinematic styles, with a minimum of organisational fuss.

After a painless install, Symphobia occupies about 18GB of your hard drive space and uses Native Instruments' Kontakt Player as its front end. Its sounds are organised into single instruments and ready-made multis, which stack individual instruments into groups, assigned to the same MIDI channel for simultaneous playback.

The orchestral samples have been meticulously recorded with correct orchestral positioning, so when you hit a note with strings, winds and brass all contained therein, sound simply explodes from every corner of the stereo spectrum.

The multis are imaginatively titled too, so you can quickly find combinations of instruments ready to score any 'virtual scene', be it romantic, quirky, dramatic, or downright scary.

Put simply, this is one of the most instantly playable orchestral libraries we've ever come across and it beats the majority of its competition in terms of load times and access to orchestral combinations to suit a broad spectrum of film styles.

The advantage for programmers who want the sound of an orchestra but wouldn't quite know where to begin with raw samples couldn't really be clearer - Symphobia will have you mocking up scores in a trice.

The limitations of the library are exposed by the range of instrument articulations present and consequently, of those missing. You'll find ensemble groups aplenty, with strings, brass and winds represented in a range of playing styles but, except for a solo string quintet, you'll find no solo instruments.

What you will find alongside the more traditional orchestral elements is a huge collection of orchestral effects, including rises, glissandi, chord clusters and mad, spiky pizzicato patches.

If you're interested in scoring for film, TV or games soundtracks, Symphobia is highly recommended. It manages to provide something different from many of the orchestral sample libraries available and, while its sample set might not be quite as broad as that of some of its rivals, it makes up for this both in ease of use and sheer, glorious playability.

The developer of Symphobia knows that most orchestral software requires time and patience to be properly exploited. It aims to turn this process around and succeeds with flying colours. It's a genuinely inspirational instrument and if it doesn't fill you with ideas, you're in the wrong game.

Listen to what Symphobia can do: